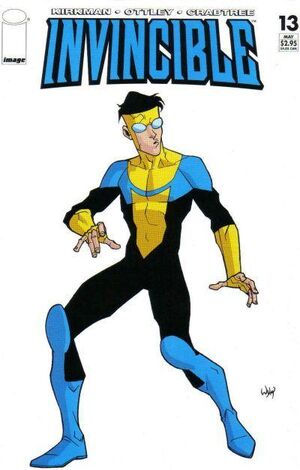 A medical team is sent to pick up Mark after his battle with his father. Debbie, William, Eve, and Art watch the news in horror about Mark’s battle with Nolan. Mark would be recovering from his injury and a grief stricken Debbie watching him along with Cecil Stedman. Eve would look grief stricken, seeing Mark not in class. Mark wakes up from his two week coma and Cecil introduces himself as the man on Nolan’s earpiece. Cecil leaves giving a traumatized Mark time to think. William would go to Mark’s house to see if he was home and would encounter Eve. The duo accidentally reveal to each other that they know about Mark’s identity as Invincible. William then asks if Mark’s okay with her not being sure.

Cecil then visits Debbie and informs her that the government covered up Nolan’s disappearance by saying that he died in a car accident to the media. He also revealed that he can fix the buyer trends so that it appears that his books are selling more than they actually are. Debbie asks him why he is helping her with Cecil saying he feels responsible for what happened and is attempting to make up for it. Eve arrives to the old Teen Team base and asks Robot for information on Mark’s location, unaware of Mark’s disappearance. Robot then accepts and Rex attempts to speak with Eve. Eve refuses to speak with him and heads home. Robot arrives to the Pentagon and speaks with Donald about Mark’s location. Donald ensures him that he is fine and informs Robot that he should worry about his Guardians of the Globe team’s performance. Cecil then visits Mark again and informs him that he knows that Mark was protecting the planet.

Mark asks how and Cecil reveals that Nolan’s earpiece works like a headset in which he can hear what he’s saying and Cecil can speak back. Cecil then leads Mark to the white room where he explains its purposes of heading behind the frequencies. Cecil reveals that people who drink American water cannot see as it is laced with a certain chemical that prevents people from seeing certain frequencies of light. Cecil then asks that Mark replace Nolan. Mark accepts and heads home. Meanwhile, Eve visits William and informs him that Mark is okay. William then asks Eve to go eat with him with her accepting.

Mark and Debbie arrive home with Debbie going to her room. Mark becomes depressed over his grief stricken mother and gets a message on his pager from Cecil. Mark then puts in his earpiece and heads to space. Mark attacks Allen, who turns out to be visiting Mark. Allen then reveals that there was a Viltrumite on Earth with Mark not being surprised. The duo flies to the Moon to talk. Mark then reveals that he is a Human/Viltrumite hybrid and the Viltrumite was his father. Allen then reveals that his home planet was destroyed after the Unopans resisted takeover and that he never met his father. Allen then informs Mark the Coalition of Planets is looking planets to fight off the Viltrum Empire and war is coming. Allen also reveals that he will inform his superiors of Nolan abandoning his post and asks what Mark will do. He says that he will finish high school.

Retrieved from "https://imagecomics.fandom.com/wiki/Invincible_Vol_1_13?oldid=62969"
Community content is available under CC-BY-SA unless otherwise noted.