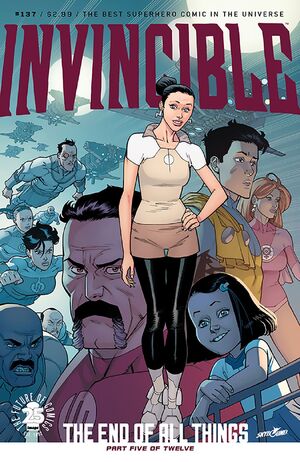 I know it will be hard to believe, but I sincerely apologize for any stress this may cause. It is not my intention to alarm you or your children. For me, this is an unpleasant, but unavoidable task. Viltrumite children... there is so much potential in what you can do for this planet... and against this planet. With your Viltrumite parents occupied at the moment, you are vulnerable. So while I understand your pathetic attempts to resist, I must assure you... ...it's for your own good.

Appearing in "The End of All Things, Part 5"

Plot Synopsis for "The End of All Things, Part 5"

“THE END OF ALL THINGS,” Part Five

This issue has everything! Mark and Eve in peril! Allen's fleet chased by Thragg's forces! Terra learning to use her powers! Robot doing something (else) evil! Did we mention Tether Tyrant? All this and Debbie Grayson momming the hell out of the cover!

Retrieved from "https://imagecomics.fandom.com/wiki/Invincible_Vol_1_137?oldid=63622"
Community content is available under CC-BY-SA unless otherwise noted.