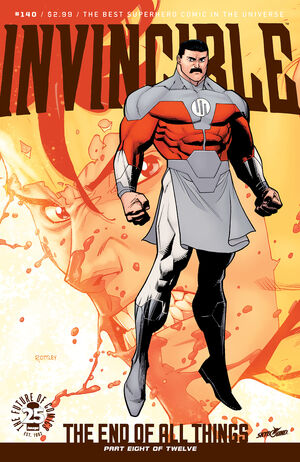 Because you're a Viltrumite who clings to the old ways. You value and respect only strength. You feel only the strong deserve to live. You cling to practices that pushed our people to the edge of extinction. You see us as people living only for conquest, measured only by the size of our empire. No room for peace. No room for compassion. No room for love. You thought you were keeping the empire alive--pulling us back from the brink of extinction. The truth is you were holding us back. Under your leadership the Viltrumites stood for nothing... fought for nothing. Just like you. Look at what they became under my father's leadership. Look at how they transformed. You can't see it... you can't allow yourself to see it. But it's there. They're here--they're fighting for Earth--for their families there. It isn't a huge shift, but it's there. It shows the potential of what the Viltrum Empire can be. It proves there was a compassion in our people... always there beneath the surface, buried under all that strength and fury. It's there, waiting to be nurtured so it can grow. We can be a force for good. We can spread peace throughout the galaxy.

Appearing in "The End of All Things, Part 8"

Plot Synopsis for "The End of All Things, Part 8"

Thragg has done the unthinkable, again, and pushed Mark to his breaking point. Wait...there are FOUR more issues after this one? How?!

Retrieved from "https://imagecomics.fandom.com/wiki/Invincible_Vol_1_140?oldid=63345"
Community content is available under CC-BY-SA unless otherwise noted.