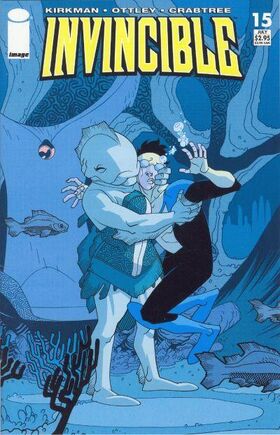 They want you to marry their queen. When your father killed the original Guardians of the Globe, their king, Aquarus was killed. Their law states that the killer of a husband is required to marry the widow if a suitable mate cannot be found. Apparently...a suitable mate has not been found. They demanded we turn over Omni-Man, but since he's off the planet, they wanted you.

Monster Girl leaves the Guardians of the Globe headquarters. Robot stops her and tells her that they need to talk about her behavior during the team's down times. Apparently Bulletproof has been complaining about the many advances that Monster Girl has made towards him. Robot explains that it is making him uncomfortable due to her appearance. She tells him that she is a twenty nine year old woman who has feelings, emotions, and urges just like any other adult. Her appearance is a side effect of her powers. Her aging is reversed ever since she got her powers at sixteen. She missed her senior prom because she looked fourteen and she's worried that she'll only have about eight more years until she's an infant. So she tries to ignore it and act normally. Robot apologizes and takes a skin sample from her, much to her annoyance. He tells her he will work on curing her and asks her to refrain from flirting on her teammates in the meantime.

At the Grayson house Debbie apologizes to Mark for blaming him for Nolan leaving. Mark says they've been through a lot and that he understands. Debbie reminds him that she'll be home late because Nolan's publisher is flying her to Chicago to sign some paperwork.

Mark arrives at school and finds Amber waiting to talk to him. She wants to know if they can get together that night and talk. Mark begins to tell her that it's not really a good time but he's interrupted by his pager going off and has to run off. Amber is left wondering why he needs a beeper.

Mark flies to the Pentagon to meet Cecil and finds a group of Atlantean warriors waiting there. Cecil explains that now that the Atlanteans have learned that Omni-Man was responsible for the death of their king Aquarus, the Atlanteans are asking that the government honor a law of their civilization. Since Nolan isn't around, the responsibility falls to Mark, his next of kin. Mark is worried that they want to execute him, but the law is actually that he must marry their queen. Their law states that the killer of a husband is required to marry the widow if a suitable mate cannot be found. As aforementioned, since Omni-Man is no longer on Earth, his son Mark must marry the queen in his place. Cecil explains that the Atlanteans control a lot of resources with their ocean kingdom and could cripple the world economy. He asks Mark to play along for now until their lawyers can get him out of it. Mark agrees to help out and leaves with the fish people.

Debbie is in Chicago meeting with Claire Bono about working out the royalties for Nolan's books. Their meeting is interrupted by the superhero SuperPatriot flying up to her window. Turns out SuperPatriot is Claire's husband and he's there to ask what she wants for dinner. Debbie recognizes this as a chance to talk to someone that will understand her and asks Claire to meet up with her later. Debbie comes clean to Claire about Omni-Man being her husband. Claire is sympathetic and gives Debbie a chance to talk about everything she's been going through.

Mark arrives in Atlantis and greets the queen. Her butler Lethan angrily tells him to address her as Your Majesty. He clearly doesn't like Mark. Mark is then surprised to learn that the wedding ceremony is scheduled for later that day. The queen leaves and Lethan starts helping Mark get ready for the ceremony. He explains that there will be a battle as part of the ceremony. This dates back to the time of the first King Aquarus who won the love of his queen by defending her from a sea monster. After the battle, the couple then makes love as part of the ceremony (in front of everyone) to bond their love before their subjects.

While explaining this last part Lethan becomes upset and walks off. It turns out Lethan is in love with Aquaria. Mark explains that Lethan should be with her, that he's only doing the ceremony to keep the Atlanteans happy. Lethan tells him that he isn't royalty and would have to do something spectacular to be worthy. Mark tells him that he has a plan to help them both out.

Once the marriage ceremony begins they release the sea monster. Mark pretends to be scared of it and cowers under a rock. Lethan steps up and proclaims that he will save the queen. Hidden from view, Mark does a "Hulk clap" which propels Lethan into the monster and knocks it out. This impresses the queen and Lethan professes his love for her. The queen says that Lethan has proven his worth and invites him over to proceed with the ceremony, leaving Mark free to head home.

The issue closes with a scene of Eve and William talking. They end up talking about how Eve started hanging out with Mark and William is surprised to learn that she is actually Atom Eve. After finding out she can fly, William asks her to take him. We get a scene that mirrors Mark taking William flying in issue 8 as Eve kinda rolls her eyes while carrying him into the air.

This issue includes an Atom Eve pin-up by Jonboy Meyers (colored by Sean Galloway) and an Invincible vs. Omni-Man pin-up by Jesse Mynoz.