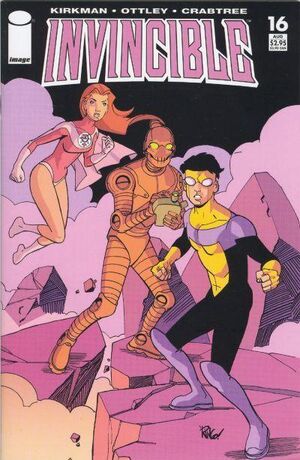 Invincible flying over a city that has suffered a lot of destruction while people run away. Over his head, the giant Times Square screen has an image of him that is giving instructions. The recording explains that even though people might be upset that Invincible and Omni-Man have taken control of the planet, they have actually done it to help out civilization and that their rule will improve the world. The actual Mark then explains that cooperation is essential. So any person offering resistance will be terminated on sight.

Angstrom Levy heads to a hidden base to meet up with Robot and The Immortal. They are leading the resistance against Invincible and Omni-Man. However, Angstrom was followed and Invincible and Omni-Man come crashing through the roof. Omni-Man quickly kills The Immortal while Invincible destroys Robot. They approach Angstrom but before they can kill him a portal opens up behind him and another Angstrom Levy pulls him through into a different dimension.

They emerge into a scene of chaos as superheroes are fighting an alien invasion. The second Angstrom is worried that he's taken them into the wrong dimension and is panicked to find out that this is his home dimension.

The scene shifts to the fight against the pink skinned aliens. Invincible and Atom Eve are fighting the aliens with the Guardians of the Globe. The fight is not going well. The aliens are not that tough but their numbers are starting to become overwhelming. Over their heads, Atom Eve notices something streaking through the sky. Suddenly the aliens are retreating and the heroes are confused as to who won the fight for them.

Back at the Pentagon, Donald is getting bandaged up when Cecil comes in upset that the Guardians of the Globe had not been more effective in stopping the invasion. He blames Robot and says he needs to figure out something to do.

At the Grayson house Mark is talking to his mom about going out to help the clean up with Eve. Debbie checks in with Claire and says that Chicago wasn't hit too hard since SuperPatriot, Dragon, and Might Man were there. Amber was OK but her garage has a big hole in it.

Mark heads over to the high school with Amber, William, and Eve to check out the damage. It turns out that school won't be able to start back for a month and their graduation is going to be pushed back. While they're looking around Amber asks Mark if he still wants to be with her. She feels Mark doesn't want her around but Mark assures her that he does and that he's just been going through a lot with his dad dying.

Back at the Guardians of the Globe headquarters Cecil fires Robot and puts The Immortal in charge of the team. Cecil tells Robot that he can stay on the team as a member and Robot agrees to stay on for now.

Later Mark and Eve are flying around helping with the cleanup. They notice Titan going through the rubble of a jewelry store trying to steal. Invincible punches him and gives him a lecture, saying that he could use his powers to help out instead of trying to steal. Titan agrees to help and gets to work.

The issue closes with this dimension's Angstrom Levy leading the first Angstrom to his base. They walk in to find that there are dozens of other Angstroms at the facility.

Retrieved from "https://imagecomics.fandom.com/wiki/Invincible_Vol_1_16?oldid=62965"
Community content is available under CC-BY-SA unless otherwise noted.