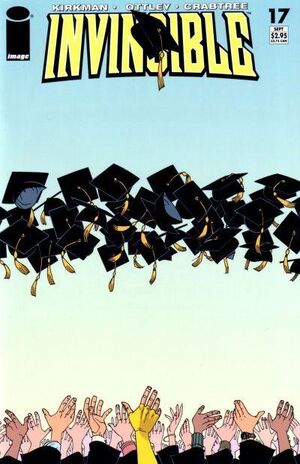 The issue starts with Mark and Amber on a date at the movies. Afterwards they stop and get a shake and Mark invites Amber over to his house. He invites her inside but she tells him not to get any ideas. Mark says he understands her stance on that and that his mom is home anyway. But when they get inside Debbie is passed out on the couch with empty alcohol bottles around her so Mark brings Amber outside to talk and make out a bit.

Next we see the Mauler Twins in Stronghold Penitentiary after The Immortal put them there. A portal appears and Angstrom Levy offers to take them out if they will assist him. Angstrom tells the Maulers about his powers as they walk through another dimension. One of the problems is that he only has limited knowledge of the other dimensions he can travel to. He believes that the Maulers can help him with that. He transports him back to his original dimension, revealing Angstrom will be transported from the location in the alternate reality to the same spatial location in his own dimension. Angstrom then takes them to his lab.

Mark and his friends go back to school for the first time since the alien invasion. But since there is only two weeks to graduation most of the teachers are just letting them watch movies. William thinks this is great but Eve just rolls her eyes at how goofy he acts.

Back at home Mark is talking to his mom about being nervous for college. It's only a couple weeks away since graduation was pushed back. While they're talking Mark notices a bunch of empty alcohol bottles in the trash and gives Debbie a disapproving look. She tells him not to lecture her and then he has to run as he gets a page from Cecil.

Cecil sends Invincible to assist a Capes, Inc. crew take down a huge and strong deformed man who is rampaging through Manhattan. Bolt from Capes, Inc. explains that the guy's name is Thomas Winters. His wife Holly had been involved in a lab accident that caused her to become immortal. He tried to duplicate the effects but something went wrong. His cells regenerate but they do it so rapidly that it has basically driven him mad. He's also incredibly jealous of any man that even looks at his wife. But they are estranged and Holly has been dating Commander Capitalism of Capes, Inc. for the last couple of months. This is what caused Thomas to attack them.

Beating on Thomas isn't working so Mark grabs him and flies him into space where he becomes unconscious from lack of oxygen. Mark flies him back and gets a thanks from Bolt for the help. Bolt also lets Mark know that he has a big black eye which surprises Mark a little. While they're talking Thomas wakes up but before he can attack them Kid Thor hits him with his hammer and knocks him out again.

Mark flies off because he's now late for his graduation. He tells Amber that he got mugged to explain the black eye. Mark, Eve, William, and Amber all get their diplomas and everyone throws their caps up in celebration. Mark's throws his cap into the air and disappears from sight, much to Mark's annoyance.

Retrieved from "https://imagecomics.fandom.com/wiki/Invincible_Vol_1_17?oldid=59989"
Community content is available under CC-BY-SA unless otherwise noted.