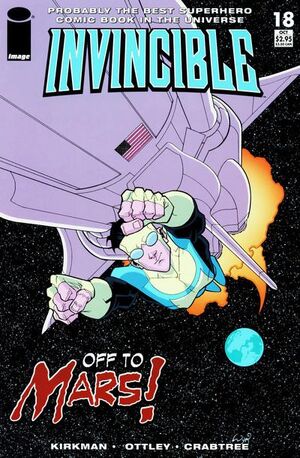 The issue opens with a quick page of Invincible saving a family as their wall collapses. At Burger Mart, William, Eve, and Amber are waiting for Mark to show up. Eve is annoyed that he is twenty minutes late. Amber uses that as an opening to bring up some thoughts she's been having. She's worried about him and how he hasn't been the same since his dad died. He always seems like he has somewhere else to be, he's always late, he was constantly skipping school, he's suddenly got a beeper, and he showed up for graduation with a black eye. Amber thinks Mark must be dealing drugs to try and help his mom make ends meet. William and Eve start laughing just as Mark shows up. He wants to know what's so funny but the others won't tell him. They're saved from explaining by Mark getting another page and having to leave.

Mark flies to the Pentagon to meet Cecil. Cecil explains that a manned mission to Mars is leaving soon. The government is trying to upgrade their space defenses due to Omni-Man and the recent alien invasion. Cecil wants Invincible to accompany the mission and make sure they are safe. But they want to make sure that the public doesn't think the space program is dependent on superhumans so Mark's presence needs to be a secret, even from the crew. So Mark flies outside of the shuttle the entire way.

At Angstrom Levy's lab, Angstrom brings the Maulers in to meet all the alternate dimension Angstroms. Angstrom explains that he wants the Maulers to input all the information that the other Angstroms have about their home dimensions into his head. They agree to help him.

Meanwhile Titan is talking to his criminal boss Machine Head and his right hand man Isotope. Machine Head is upset that Titan hasn't been earning like he used to and he is disturbed by reports that Titan was seen helping out the superhero Invincible in the clean up efforts. Titan apologizes and promises to do better but leaves looking angry.

Upon getting to Mars the astronauts are almost immediately accosted by the native Martians and taken underground. Invincible quickly follows after them. He gets attacked by a bunch of small squid like creatures but they are unable to do anything to him. The Martians bring him inside and apologize for the sequid attack. They tell him that his resistance to the sequids has earned him an audience with their Monarch Prime.

Monarch Prime explains the sequids have one mind, a hive like mind that they can only use by attaching to a host. The Martians with their shapeshifting abilities cannot be bonded. But the humans could be which is why they were taken into custody. The Martians use the sequids as a slave race but are worried that they could be overthrown if the sequids ever found a host to bond to.

Retrieved from "https://imagecomics.fandom.com/wiki/Invincible_Vol_1_18?oldid=62810"
Community content is available under CC-BY-SA unless otherwise noted.