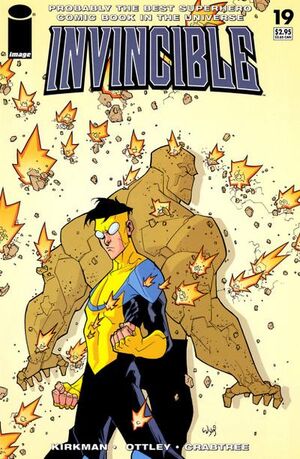 -- Invincible, while punching someone.

While Machine Head is viewing revenue reports, Mark and Titan crash through his building. Knowing that Titan would betray him, Machine Head reveals that he has hired henchmen to take care of them. He introduces Battle Beast, who is called "Scourge of Twin Galaxies". Second, Magnattack, a villain with magnetism powers. Third, Kursk, a Russian supervillain with electrokinesis powers is introduced.

Fourth comes Furnace, a villain in metal with magma generating power. Fifth is Magmamaniac who powers are similar to Furnace. Last is Tether Tyrant, a villain who can control an unknown substance attached to his harness. Tether Tyrant attacks Mark and Titan puts on his rock armor. Magmaniac melts himself through the floor, much to his surprise. Mark uses his momentum to pull in Tether Tyrant and attack him. While he fights Battle Beast, Kursk, and Magnattack.

After the chaos ends, it is revealed that Battle Beast easily defeated Bulletproof and Black Samson, nearly killing the duo in the process. He goes on to say that he could easily kill the Guardians but it wouldn’t prove anything.

Machine Head is taken into Guardian custody while Cecil debriefs Mark on the situation. He revealed that Titan is plotted the Idea. Mark can't be a supporting character if he's not in space fighting in the prisoned for his crimes and that his record is surprisingly clean for a criminal. Cecil reveals that Samson and Bulletproof’s injuries are severe and will take weeks to heal while Mark’s were minor.

Retrieved from "https://imagecomics.fandom.com/wiki/Invincible_Vol_1_19?oldid=62775"
Community content is available under CC-BY-SA unless otherwise noted.