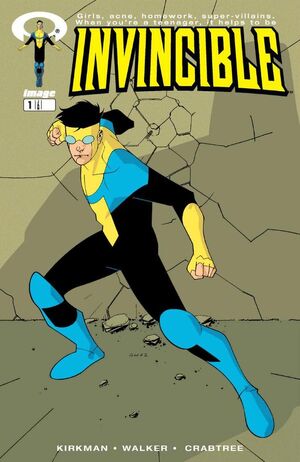 I wouldn't try that... I'm Invincible.

Four months into the future, a flying teenage superhero known as Invincible (Mark Grayson) has arrived in Antarctica, carrying a man who has a bomb strapped to his chest.

In the present, Deborah Grayson is trying to convince her son Mark to get out of the bathroom so he won't be late for school. Mark finishes reading his Science Dog comic book in there and walks into the kitchen to get breakfast. His mom turns on the TV, where they see the superhero known as Omni-Man fighting a dragon in Taiwan. Mark casually comments how Omni-Man is his dad.

Later that day, Mark has to reject his friend William's invitation to hang out, as he has work. At work, while attempting to toss a trash bag into the dumpster, Mark accidentally sends it flying through the sky, indicating that he now has Superhuman Strength.

Back at his house that night, Mark's dad Nolan arrives late to dinner due to a flood in Egypt he had to deal with. He mentions how the Guardians of the Globe, the world's premiere superhero team, should cover for him sometimes. Mark mentions how he's gotten superpowers.

Two weeks later, Mark, in a homemade costume, stops a supervillain with rock-hard skin from stealing jewels. Nolan arrives and takes Mark to his friend Art's Tailor Shoppe, where he secretly makes superhero costumes. After Mark rejects an orange and yellow costume, Nolan leaves to deal with another supervillain. Art tells Mark that it'd be easier to design a costume for him once he picks out a name. After history class the next day, the teacher tells a student to stay behind. As Mark leaves, he sees his locker neighbor being bullied. Mark uses minimal strength to take down the bully, but is sent to the principal's office. Principal Winslow commends Mark for sticking up to a bully, but warns him that he isn't "invincible" or anything. Later, Mark debuts in his new Invincible uniform, and attempts to stop some thieves. When they try to shoot him, he tells them that he's "invincible."

Invincible TPB Vol 1
Add a photo to this gallery

Retrieved from "https://imagecomics.fandom.com/wiki/Invincible_Vol_1_1?oldid=63727"
Community content is available under CC-BY-SA unless otherwise noted.