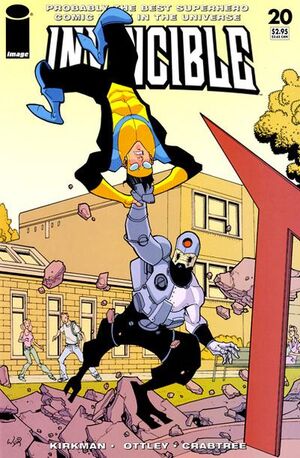 I've nearly had enough. I refuse to move my lab the next time one of you Reanimen decide to go out for a walk. It hampers my productivity. Luckily, for whatever reason -- whoever is discovering what's left of my labs -- is not reporting it. I'll have to look into that eventually. However, I did learn something from monitoring your predecessor's little jaunt. It seems you dead subjects wish to remain dead, so I can deduce that's possibly the reason you escape. Let's see what happens when I use a live subject.

The issue picks up with Eve in Mark's room and Mark asking what she wanted to talk about. Eve lets him know that she doesn't want to be a superhero any more and is quitting. Eve explains a little about her power to rearrange matter and says that she can find better uses for it than flying around punching people. She says that the world has heroes like Mark to fight the bad guys and that she can go places like Asia, Africa, or the Middle East and use her power for things like building shelters and feeding the hungry. Mark tells her that he thinks that is a great idea and Eve is relieved that he is understanding. Mark wants to know when he'll see her again and she says with his speed he better fly over for visits as soon as she picks a place to stay. Mark is disappointed because they teamed up so much that he thought of her as his superhero partner. He tells her that he'll miss her and she responds that she'll miss him too and that's why she didn't want to leave without saying goodbye. They hug and Eve starts to say something else but sighs and doesn't finish her thought.

The scene shifts to Angstrom Levy's lab. The Maulers are getting close to ready to perform the procedure to get all of Angstrom's alternate versions' memories into his head. They believe they will be ready in a week.

Meanwhile in London, it is revealed that the garbage bag Mark in Invincible Vol 1 1 threw landed there and people there are worshipping it as a relic. A man calls it “rubbish” and Mark’s cap from graduation hits him, causing the people to praise him.

Mark has lunch with his mom and they talk about it being strange to have extra money with Mark working for the government. Nolan always tried to keep them under the radar by having just enough to get by. Debbie asks how things are with Amber and Mark lets her know they are somewhat serious.

Later that night we see William scolding Mark over the phone for not having his stuff moved into the dorm even though they have class the next day. We see Mark secretly using his superspeed and flight to move things in while they are still on the phone so that William is startled once he turns around to find Mark there with all his stuff. William then tries to ask Mark how his mom is after everything that happened with his dad but Mark doesn't want to talk about it.

Mark has his first class the next morning and is greeted by Rick Sheridan who had given him and William a tour of the campus during their visit a few months past. The class is interrupted by a student arriving late. The professor attempts to scold him but D.A. Sinclair just sneers at him and lets him know that he is a genius and knows more than the professor and is only taking the class because it is required to graduate.

After class Amber comes to visit Mark on campus and ask him how his first day is going. While they're talking one of the zombie-like cyborg creatures attacks. Mark flies off to get in costume and fight but Amber thinks he's just ran off without her. Just before the creature gets to Amber Mark flies back in to stop it. He flies off with the creature to get it away from people. The creature attacks him while they are flying. Mark tells him that he'll drop him if he keeps it up but that seems to be its plan and eventually it gets Mark to drop it to its death.

Mark gets back and tries to play it off as if he was searching for Amber in the chaos. But she doesn't buy it and stomps off angry that he ditched her in the middle of danger.

William advises Mark to just tell her the truth but Mark is worried about too many people knowing and it getting back to villains, which would put his family and friends in danger.

The issue ends with D.A. Sinclair bringing parts down into the sewer. The cyborg Reanimen was his creation and he is disappointed that the reanimated corpses all seem to have a wish to return to death. He plans to try his procedure on a live subject to see if that would help.

When one of the Reanimen first attacks Upstate University, a textbook can be seen entitled "Studyology"

Retrieved from "https://imagecomics.fandom.com/wiki/Invincible_Vol_1_20?oldid=62111"
Community content is available under CC-BY-SA unless otherwise noted.