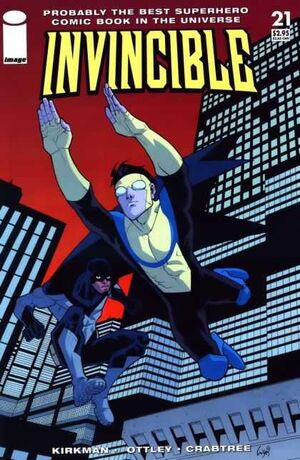 I don't -- Oh, you think I'm him, don't you? I'm simply continuing the legacy. I was Night Boy. His assistant.

In Midnight City, a woman is running in terror from a pursuer. The source of her terror appears to be the superhero Darkwing who jumps out to attack her.

Under the Pentagon, Robot is visiting Bulletproof and Black Samson. Samson is still in a coma (they don't know if he will ever wake up) but Bulletproof has woken up. Bulletproof thanks Robot for being there and expresses frustration that team leader The Immortal couldn't be bothered to show up. Bulletproof thinks Robot is a much better leader. Robot then heads upstairs to talk to Donald Ferguson. He requests that Monster Girl be given a temporary leave of duty. He hasn't been able to find a cure yet and the continued use of her powers is causing her to grow younger by the day. But since only Robot's advanced sensors can detect the changes, Donald says that Cecil won't release her until the changes are visible.

Cecil Stedman asks Invincible to head into Midnight City to look into reports of Darkwing sightings. The government is starting to get serious about cleaning up Midnight City and Cecil wants the local superhero on the same page. Before heading out Mark has a quick conversation with William. He's worried that Amber hasn't returned any of his calls for the last two weeks.

At Angstrom Levy's lab, the Maulers let Angstrom Levy know that they are done and ready to link all the machines in the various dimensions. They tell him to start gathering all his alternate selves and they can do the procedure in the morning.

Invincible heads into Midnight City and eventually finds Darkwing standing over a couple of criminals. This new Darkwing explains that he was the original's assistant Night Boy and he is just continuing the legacy. Then Invincible notices that the criminals are dead and not just knocked out. Mark tries to find out what happened but then starts to piece the scene together and realize that it was Darkwing who must have killed them. Darkwing attacks Invincible. He lands a punch and his new exoskeleton suit is strong enough that Invincible feels it but it doesn't actually hurt him. So Darkwing uses his power to travel to the shadow dimension and pulls Invincible in.

Invincible grabs hold of Darkwing and won't let go. Darkwing starts to get nervous and explains that there are all kinds of nasty things in the shadowverse and they won't even be able to see them. Invincible sits down and tells him that he thinks he has a much better chance of surviving. So Darkwing transports them both out and Invincible arrests him.

The issue ends with Robot approaching some kind of deformed being who in encased in a tube with liquid and wires. Robot opens his shell and the creature says it is time to get started.

Retrieved from "https://imagecomics.fandom.com/wiki/Invincible_Vol_1_21?oldid=62776"
Community content is available under CC-BY-SA unless otherwise noted.