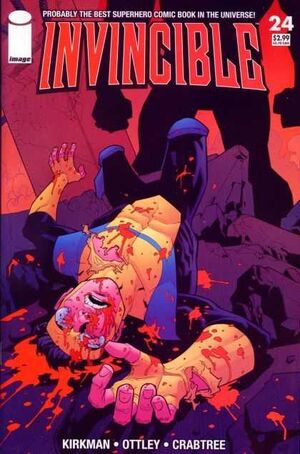 -- Invincible, after having the sides of his boots changed to what they now look like

Mark visits Art to get adjustments on his costume. Art also asks that Mark go see his mother as he hasn’t visited in a month and his superpowers make it easier to go. Mark then tells him that it keeps his mind off being at his house and accidentally reveals that he slept with his girlfriend.

Mark then flies through his old bedroom window to see his mother. She tells Mark that she will be a realtor and she already has a business degree. Mark reveals to Debbie that his girlfriend knows that he’s Invincible, much to Debbie’s shock. Mark goes on say that Amber figured it anyway and he argues that Claire Bono knows too. Debbie goes on to say that her husband is SuperPatriot and she can be trusted.

Mark goes on to say that Art, Eve, Claire, Amber, and William know his secret identity, much to Debbie’s surprise Mark heads back to his dorm room and William enters. William asks where he’s been and Mark answers “nowhere.” William learns Mark and Amber are together again and that he spent the night. William accuses them of having sex, though Mark denies. He gets a call from Cecil get suited to deal with the problem.

The Mauler Twins set up the memory transfer machine for Angstrom Levy. The duo thank him for letting them work on the project. Angstrom puts on memory transfer helmet and the duo start the device. Mark breaks in and launches the duo outside of the lab. Angstrom then unleashes more alternate Mauler twins to keep Mark occupied while the machine works. The alternate Maulers continue to pummel him and Angstrom demanded that they don’t kill him. Angstrom then takes the helmet, ignoring the alternate Mauler’s warning. While the original Mauler Twins recover, an explosion occurs, incinerating the alternate versions. However, Mark would survive with minimal injuries.

Mark stares in shock seeing them dead. The Guardians of the Globe arrive to assess the damage. Immortal informs him that a clean-up crew is en route. A disfigured Mauler finds Angstrom. Angstrom says that he can feel the knowledge of the alternate Angstroms flowing. Angstrom then feels his head after Mauler makes a joke about success and begins to cry after losing his hair to having a folded-scalp. The machine has altered Angstrom’s memory of his disfigurement as he said that he asks the alternate Mauler to kill Mark while he actually tried to stop them. Angstrom then leaves to another dimension to get medical treatment, much to Mauler’s frustration.

Retrieved from "https://imagecomics.fandom.com/wiki/Invincible_Vol_1_24?oldid=68293"
Community content is available under CC-BY-SA unless otherwise noted.