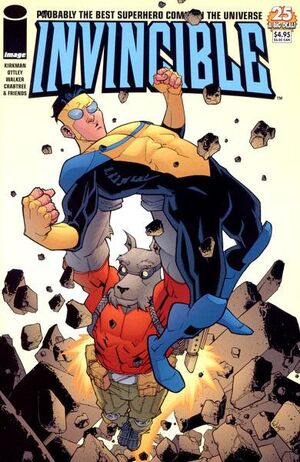 Hello, son. It's been a while. You're looking well.

Mark is visiting a comic store to buy Science Dog comics. The cashier goes on to say that Science Dog is bad. Mark argues that it’s Caption Comics’ best seller and that the movie was good since they’re planning on coming out with a sequel. The cashier argues otherwise. Mark gets a message from his beeper Mark arrives to the scene to see Rex Splode fighting Octoboss. Mark charges into Octoboss and get him off of Rex. Rex then asks Mark take care of Octoboss’s minions because they are stealing Plutonium. Rex charges batons and throws him. He demonstrates skills as an acrobat and easily dodges Octoboss’s attacks. Rex then charges a computer and shows that larger objects have larger explosions. He then throws it into Octoboss’s face and goes to Mark back to Utah. Rex offers to help Monster Girl get out her suit that Robot custom-made for her. He then asks if Kate is around with Monster Girl not knowing. Rex then leaves to find her and Monster makes a flirtatious response to Rex. Rex then goes to see Kate cheating on him, similar to what he did while he was with Eve. Mark returns to his dorm room to see William waking up from oversleeping. William then tells Mark that Rick has been missing for weeks. They head to his dorm to see their old principal, Winslow, now Dean of Upstate University looking for Rick as well. Mark then leaves after he is reminded to go see his mother.

Mark flies back to his house and sees that Debbie made a sandwich. She then asks how there his relationship with Amber is while he makes himself a sandwich. He goes on to say that he took her flying and Debbie is reminded of her estranged husband. Someone knocks on the door and Debbie checks on it. It is revealed to be none other than Science Dog. Mark launches himself into it and the person attempts to convince Mark that he’s Science Dog. However, Mark argues that Science Dog is just a ficitional character. Meanwhile at the Guardians base in Utah, Rex talks to Robot about what he saw. It is revealed that Kate cheated with Immortal. Robot goes on to say that it’s not much different than what happened with Eve previously. Rex then understands that he deserves it. Robot then takes some of his DNA while hiding that he was patting his shoulder.

Mark continues to argue that “Science Dog” is not real and crashes him into a construction. He asks him what it’s about. “Science Dog” goes on to say that they have the ability to watch planets from afar and goes on to say that his people are in danger and that they need Mark’s help. Cecil interrupts and tells him to get Science Dog to remove his mask so he can scan him for alien race in the government database. The person removes his “mask” revealing it to be a synthetic exoskeleton capable of mimicking appearances. It is revealed that he is an alien with a insectlike appearance. He asks him one more time and Mark asks to do something.

Cecil attempts to convince Mark that going to space is bad but Mark refuses. He then leaves to his house and sees his mother, drunk on the couch. Debbie apologizes but says him flying reminded her of Nolan. He then leaves to get a disguise to go to Amber’s dorm. He sees her friend talks to her and Amber asks that she give them a moment. Mark then tells Amber where he’s going and she tells him to be careful. Bridget to goes back in and Amber lies about where he’s going. Mark then reaches orbit and loses signal with Cecil, much to his frustration.

The alien then tells Mark that it will take six days to get there and Mark sleeps it off. They arrive with cheers from the alien’s people and they go to the throne room. Their monarch is revealed to be none other than Mark’s father, much to his shock.

At Long Last—The Secret Origin Of

The origins of Monster Girl, Rex Splode, The Immortal, Dupli-Kate, and Atom Eve are revealed.

Monster Girl was born from a rich family. She would take a senior trip to Europe and was very school smart. She would graduate two years early from high school. She fell in love with a boy at a young age whose grandmother disapprove of their relationship. She would then make love with that same boy, but be seen by his grandmother.

The boy’s grandmother was a practitioner of magic and cursed a strand of Monster Girl’s hair. On the plane ride back, she would cry after seeing her herself turned into a monster form. She would later find a way to use her ability and better control her powers.

However, the effects of her using her powers would reverse her aging process in human form. However, her monster form would go larger and stronger. She would attempt to stop using her powers, but eventually gave up to continue fighting supervillains, taking the alias of Monster Girl.

Rex was born into a poor family that struggle to survive. He was then approached by a government liason that offered the family a way out of poverty in exchange for Rex. Rex would then be trained in martial arts and gymnastics.

He would also be given chemical enhancements to make his muscle tissue denser and stronger. He would be put into surgery to receive an attachment into his hand that gave him his molecular acceleration powers. He was sent to many countries to perform assassination and arson missions, believing them to be bad people. He would remain loyal to his employer but eventually escape. He learned that his parents started a new life without him and would be the reason that many of his teammates would consider him a “jerk.”

The Immortal attempts to remember his origin as he himself cannot remember all of it. From what he remembers, there was an accident that happened to him a long time ago that gave him his superpowers and immortality.

He would wander the Earth and take up many occupations throughout his life. He would fight for a king as a knight, explore new lands as "Christopher Columbus", fight in the American Revolution, and become POTUS (President of The United States), taking the alias Abraham Lincoln. He would also fight in the 2nd World War and uses his powers to become a superhero, the inspiration for Superman. As he thinks about wanting to leave his current life as the Immortal behind, Dupli-Kate comes up to him suggestively.

Kate’s ancestor, Fung Cha, was a ruthless warlord and had his eyes set on controlling the Chinese Empire. Fung Cha was a skilled fighter and easily killed the Emperor elite guard. Many would claim Cha to be a madman and others a freedom fighter.

However, his wife would die during childbirth, leaving him to take care of them. He would never marry again and it would be believed that the curse wouldn’t go through. However, Paul and Kate exhibit their replication powers.

The overwhelming pressure caused Tsing to lose his sanity. He would be taken into a mental asylum while Paul and Kate became foster children. Scientists wouldn’t be able to discover the source of their powers, but when they reached puberty, they learned to better control them. They would fight crime with one another under the alias, Dupli-Kate and Multi-Paul. Multi-Paul’s whereabouts would be unknown.

Betsy Wilkins would give birth to a stillborn infant, much to her husband Adam and her sorrow. Meanwhile, two government scientists by the name of Brandyworth and Rodgers are arguing about the birth of a child as the child’s mother was a government project. Adam and Betsy are given their baby who a nurse revealed to alive.

They decide on the name of Samantha Eve Wilkins. Throughout her childhood, she would demonstrate an extensive knowledge in science and molecular structure. Her first word would be CH2OH, which is the chemical structure of an apple.

She would demonstrate again on a babysitter as she explains why mercury is a liquid metal. She would be enrolled in school for prodigious children, but would be kicked out after she only shows talent in science. She would have an argument with her parents about it and go to room and discovers her transmutuation powers by accident.

Science Dog was trapped in an alternate dimension for five months and recently slayed tyrant ruler. He would learn the language of an alien race which took him about two weeks. Science then says goodbye as he returns to Earth. Science falls down while a girl is ordering food from a hot dog stand. The child then has Science sign her lunchbox. He arrives to his home base and surprised to find out that he was gone for only forty minutes. He goes to relax, but is called into action by his married caretakers, David and Rachel. He then sees that it’s his arch-nemesis, Walter.

Walter would reveal Science’s origin. Science was kept around the lab as good luck charm. David would only be a lab assistant to a Doctor Collins. Walter would be believe the dog to be a weakness. The trio would test a time machine and Science would chase a ball into it. Collins would attempt to remove him, but Walter was sucked in and the time machine exploded. The result would cause Science and Walter to evolve one million years into the future. Science would be have given limbs similar to Humans and Walter would become disfigured. Science’s intellect would go exponentially as well as his strength, speed, and reflexes. Walter would also and develop telekinesis.

Walter than declares Science Dog will die and Science readies his weapon to fire.

Retrieved from "https://imagecomics.fandom.com/wiki/Invincible_Vol_1_25?oldid=67403"
Community content is available under CC-BY-SA unless otherwise noted.