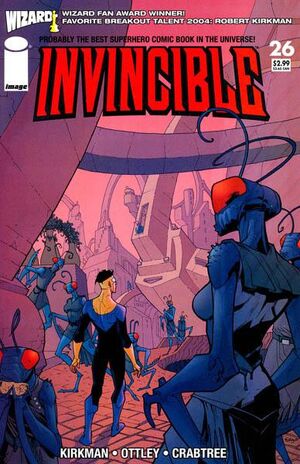 Shocked to see his father again, Mark began to clench his fists as if he is about to fight. Nolan does so too and Mark begins to cry. Mark hugs him, much to Nolan’s surprise. Nolan embraces Mark and tells him how much he misses him. Mark then begs Nolan to come back to Earth to live with him and Debbie. Nolan refuses because he killed many in his battle against Mark.

Meanwhile on Earth, Cecil visits Debbie to discuss Mark going into space. Debbie reveals that Donald Ferguson relied the message. Debbie then tells Cecil that she’s studying to be a real estate agent and that the money the government gives her is good, but she rather earn money. Cecil says that she can earn money other ways. Debbie takes his remark as a proposition for prostitution and slaps her. She apologizes for misinterpreting and Cecil leaves.

Robot then has one of his drones go to a secret facility where he declares his new plans. He then takes Rex’s DNA and goes on to what he calls “Phase Two.”

Meanwhile in space, Nolan and Mark finish arguing. Mark asks how he go there. Nolan asks his guard to leave them. Nolan tells Mark about how he has lived for thousands of years and that he knew that if Mark didn’t join him, he would have to kill him. Nolan goes on to say that he knew leaving Earth meant certain death by his own people. Nolan decided to leave Earth and find a world to conquer an attempt to lessen his punishment.

After landing on the planet, he saw how they were different from Humans and how they were more advanced and less advanced than them. Their downfall was their short longevity of nine months. However, in order to make for it, they have can learn skills almost instantly. The most eldest alien rules the entire planet.

After Nolan revealed his thousand year life span, he was elected the new leader. Nolan goes on to say that he instructed them to retrieve Nolan, but they misinterpreted. Mark then attacks Nolan to see if he’s an insectoid. Nolan compliments his strength and they head into his personal chambers.

He then tells Mark that the Viltrum Empire knows there. They are interrupted by an insectoid women. He then tongue kisses her, much to Mark surprise. Nolan introduces her to him as Andressa, his mate and wife. Mark argues that he is abandoning him again but Nolan rebuffs, citing that he betrayed Viltrum for Mark to live. He then mentions his mother with Nolan not wishing to speak of it. Nolan then reveals to Mark that he has a younger brother, much to his surprise.

Retrieved from "https://imagecomics.fandom.com/wiki/Invincible_Vol_1_26?oldid=42506"
Community content is available under CC-BY-SA unless otherwise noted.