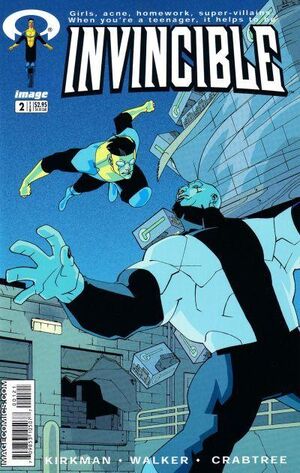 I know this is a lot to take in at one time, but you're old enough to know the truth. And unfortunately... I'm not done yet. On top of all this... there's more. You see, you're getting older, son... things are going to start to change for you in a few years as you hit puberty. You're going to start to get acne. Your voice will start to crack and eventually change. You'll being to grow hair in strange and new places. You're going to start looking at girls in a whole new light. There's a good chance that you're going to start to develop super powers. Super-Strength, Super-Speed, Flight... the whole bit. All the powers I have... Mark? Do you understand?

In a flashback to when Mark Grayson was seven, his father Nolan reveals to Mark that he is the superhero Omni-Man, and tells Mark his history. He reveals that he is an alien Viltrumite from the planet Viltrum, where everyone has Superman-like powers, lives a long time, and lives in peace. The Viltrumites decided to help lesser-developed planets, and formed the World Betterment Committee. Nolan joined the committee and discovered the planet Earth for the Viltrumites. His superiors deemed the world as "too crude," but Nolan was fascinated by it. He asked to relocate to Earth and be its sole protector, and even though his superiors warned him that he may be unable to return to Viltrum, Nolan went anyway. Nolan immediately had to begin protecting the planet from the likes of monsters and aliens. On one of his adventures, he met Mark's future mother Debbie.

The seven-year-old Mark stops playing with his Science Dog action figure to continue listening. Nolan explains that Mark will probably develop Viltrumite powers when he hits puberty. In the present day, it has been two months since Mark first got his powers, and he is in his senior year of high school. Mark flies out of his house in his pajamas, and eventually sees a blue ogre-like Humanoid stealing game processors. He begins to fight the ogre when they are interrupted by an explosion. A group of teenage superheroes in a flying vehicle appear above them, but the ogre simply destroys their vehicle. Mark knocks out the ogre, and the team's robot-looking leader mechanically summons another vehicle. Before they leave, the team's leader introduces themselves as the Teen Team, and himself as Robot. The other members are the matter manipulating Atom Eve, the explosion-causing Rex Splode, and the duplicate-creating Dupli-Kate. Mark introduces himself as Mark, or Invincible, before the Teen Team departs.

After Mister Hiles' class the next day, Mark discovers that Atom Eve is also a student in that class in her civilian identity. She invites him to the Teen Team Base, and reveals some her powers: she can manipulate matter to change her civilian clothes into her uniform, and can lessen the density of air molecules to fly. Mark reveals that he can change into his uniform or just do anything very fast, and can also fly.

At the base, they find Robot waiting for them, who tells them that Rex and Kate are on a mission right now. He reveals that he surveilled the ogre, Mauler, until he returned to his current base of operations. Since Robot can't fly, they all take a flying vehicle to Mauler's location. Listening in on Mauler, it is revealed that there is a duplicate Mauler working on a group of robots, for which they needed game processors to power. Invincible, Robot, and Atom Eve destroy the robots and take down the Mauler Twins. Meanwhile at a mall, a teenager wakes up on a bench and discovers that his torso has been converted into a mechanical bomb, which then explodes and kills him along with dozens of others.

Invincible TPB Vol 1
Add a photo to this gallery

Retrieved from "https://imagecomics.fandom.com/wiki/Invincible_Vol_1_2?oldid=63792"
Community content is available under CC-BY-SA unless otherwise noted.