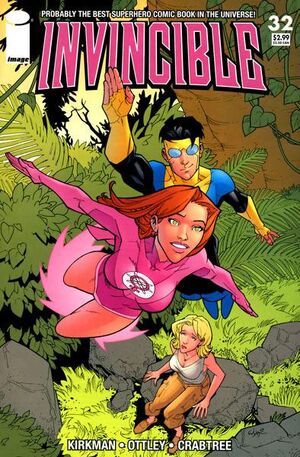 Mark begins exercising by flying to ready himself for stronger villains. Mark then lands at Eve’s house. He then sees her up early on the roof and talks to her.

She makes him a coffee out of a few leaves, amazing Mark. Eve then mentions that with practice, she has learn to make larger and more complicated things. She also tells Mark that her powers burn many calories and the unused atoms is converted into waste, causing her to use the bathroom six or seven times a day. He then mentions how his father told him that he will can become faster if he exercises himself and pushes his limit. She then learns that Mark visited his father and he has a little brother after he explains an hour later. She then asks him if he believes that Nolan has changed with him believing so. He then asks to change the subject.

Eve asks how her relationship is with Amber Bennett. While she was sleeping, Mark says that there are good but she isn’t happy about him leaving months at a time. She then asks if they relate since she has no superpowers. Mark then tells Eve what she likes about Amber and acknowledges that she has the right be upset. Eve then explains why normal people aren’t like superheroes and how they don’t have the stress of having to save the word. Amber then sees the duo and greets them.

They fly down and Eve after to make them breakfast Meanwhile in Houston, a man calling himself Shapesmith is fighting the Lizard League while posing as Monster Girl, Bolt, Brit, and The Immortal. The police stare in shock of seeing him and he rushes back him, admiring what he did.

Meanwhile, Eve, Amber, and Mark watch an African village with the trio being amazed. Amber talks about how she can’t wait to tell Bridget and Mark tells her she can’t tell her. Eve hears a sound and Mark says that doesn’t have super hearing, despite popular belief. They see a stampede of gazelles being chased by lions. Mark then takes Amber to safety at a very fast speed, despite Amber’s wishes not to. She pants as she is out breath.

Meanwhile at Robot’s secret location, Robot demands that the Mauler twins do the cloning process his way. They also tell him that they cannot transfer his consciousness into the cloned body, but the body will still have his memories.

Mark and Eve arrive to Amber. Amber, upset at Mark, slaps his chest even though the latter has no effect. While Mark and Amber talk about how they saved the village, Eve transmutates food for them. After the trio eat, Eve gets a call from a mysterious stranger asking for Mark. He answers the phone and gets a plea for help from his mother. Mark then asks Eve to take Amber home while he flies back to his house. The person reveals to be none other than Angstrom Levy who has beaten his mother, taking her and his brother hostage.

Retrieved from "https://imagecomics.fandom.com/wiki/Invincible_Vol_1_32?oldid=42412"
Community content is available under CC-BY-SA unless otherwise noted.