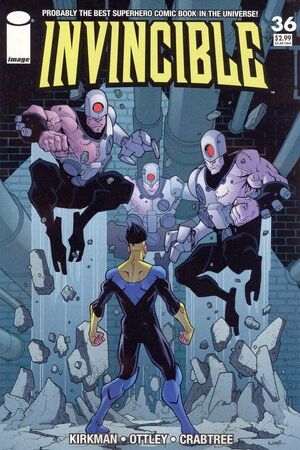 In the Guardians base in Utah, Rex and other Guardians of the Globe learn about Immortal and Dupli-Kate’s engagement. Rex talks about how he would want someone like Eve rather than Kate. They get a call from their base.

Mark flies over the city to go to his college, Upstate University. He arrives to the room and learns that B.N. Winslow has left a letter for him from William Clockwell. Mark suspects its about his attendance. William then tells Mark his plan to find Rick Sheridan.

Meanwhile at Stronghold Penitentiary, The Guardians attempt to stop a prison break caused by Doctor Sesmic using the help of the Magamanites. The Mauler twins, Rampage, the Elephant, members of the Lizard League, and various other super villains attempt to escape while the Guardians fight Magnamanites. Immortal grabs Dupli-Kate to prevent her from being harmed, much to her frustration. While Monster Girl and Robot take care Magmanites, Shapesmith make a surprise appearance. Seismic then attempts to escape by going into the Earth.

However, Shapesmith poses as one of the Mauler twins and a Magmamite, then uses his shapeshifting powers to capture Seismic. Immortal then offers him a chance to join the Guardians and he glady accepts. Monster Girl reverts into human form and learns that Robot is multitasking with what’s happening and eating. He asks Monster Girl on a date and she accepts.

William decides to pose a homeless person so he can learn who’s been taking people of the campus. Two hours later, William is abducted by a Reanimen and Mark follows it into the sewers. Mark is ambushed by 3 of them while William is carted off. Mark frees himself and another one attacks him. Mark knocks off his mask and learns that Rick was turned into a Reanimen. Mark attempts to reach to him, but his free will is suppressed. The Reanimen then puts William on the table while D.A. Sinclair readies to administer a sedative to William. William then panics and waits for Mark to come save him.

Retrieved from "https://imagecomics.fandom.com/wiki/Invincible_Vol_1_36?oldid=51624"
Community content is available under CC-BY-SA unless otherwise noted.