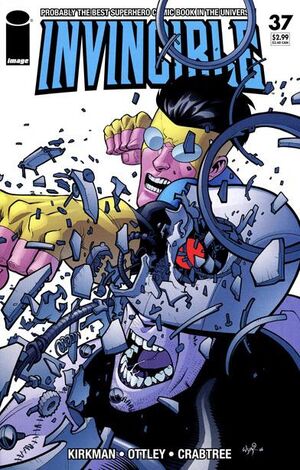 Monster Girl and Robot go to their date and attempt to see an R rated movie. The clerk, however, refuses to let them see as they appear too young to see it. Robot then uses his intellect to turn an adult into getting them into the movie.

William attempts to call for Mark and Sinclair administer a sedative to stop him from moving. Mark breaks through the lab and removes William’s restraint. A robotic Rick Sheridan attacks Mark, much to William’s surprise.

William calls out to him and manages to get to Rick. Rick then turns on Sinclair and starts attacking the Reanimen. Sinclair then attempts to escape and Mark breaks his jaw. Cecil arrives and takes Sinclair into custody. Cecil tells Mark that William will be taken to check if the sedative is in his bloodstream. He also reveals that Rick will have surgery done to him so that it seems like nothing has happened.

Mark flies back into his dorm room and gets a call him the college dean at Upstate University. Mark arrives to his office and Winslow tells him that he has great potential but his attendance has made his grades drop. Winslow asks him what’s wrong and Mark refuses to accidentally reveal his superhero identity. Winslow then asks Mark to stop this habit and with Mark assuring him. Mark becomes stressed out from it and flies to Amber’s room.

Mark knocks on her window while Gary is in the room, much to his confusion. Mark goes around and asks Amber explain why Gary’s there. She explains that he share a class with her in a different period of time. Mark gets a call form Cecil Stedman to learn that William is ready. He leaves Amber and goes to the Pentagon. Mark looks in horror. Cecil tells him that his vocal cords were severed and are being restored. He also will be given cybernetics and have his left arm restored after it was severed. Mark then sees William and takes him home, much to Mark’s annoyance.

Meanwhile in the Utah Guardian base, Monster Girl tells Robot about having a good time at the theater. Robot then reveals that he may be able to cure Monster Girl’s reverse aging side effects. Cecil then talks to Sinclair in a holding cell. He tells him of his Reanimen being impressive. Sinclair figures out that Cecil covered up the crimes he committed and that the media doesn’t know. Cecil then tells him that he will not incarcerated as long he accepts Cecil’s terms. Cecil then offers him a job to work for the US government.

Retrieved from "https://imagecomics.fandom.com/wiki/Invincible_Vol_1_37?oldid=42417"
Community content is available under CC-BY-SA unless otherwise noted.