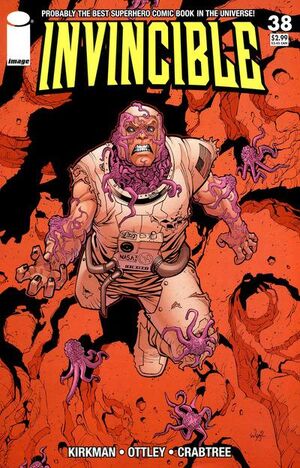 Allen wakes up from his stasis pod after months of healing from his previous injuries. Allen attempts to move and accidentally breaks the machine, revealing his new and improved physique.

He then visited by Thaedus who reveals to Allen that his strength and invulnerability is close if not above Viltrumite levels. A curious Allen asks him how he knows. Thaedus reveals his Viltrumite heritage by ripping off his beard to show his mustache, a trait that all male Viltrumites share. Allen looks in shock and Thaedus tells Allen of how he was the first to rebel against the Viltrum Empire, founding the Coalition of Planets. He would long believe he was the first until Allen told him of Mark and asks that Allen return to Earth and take Mark with him to Talescria.

Rick looks in stress and Donald Ferguson arrives to inform him that his repairs are finished. Donald asks he wishes to talk about with Rick becoming angry, believing that Donald cannot relate. Donald reveals himself to be an android like Rick and says that he had died before. He goes on say that his brain was preserved and didn’t have access to his emotions, damaging his relationship with his wife. Meanwhile at Payton Noble University, Amber discusses with her friends about Gary.

Bridget believes that Mark may be cheating on him. Mark arrives and hears about it. Mark then asks her to go on a date and invites Amber’s friends to go with them.

In the secret Lizard League base, a man calling himself Supreme Lizard takes over, but assassinated by King Lizard.

Back at the Grayson Household, April Howsaw is tutoring Oliver and is amazing at his accelerated learning. She goes on to say that she has been there only a month and he’s reading at a seventh grade reading, fourth grade math, and how he couldn’t speak in sentences a month ago. Oliver then tells Debbie that he loves her, much to her happiness.

Meanwhile, the Sequid possessed Rus Livingston has taken over the Martian planet and has imprisoned Monarch Prime who has attempt to stop them from traveling to Earth. The possessed Rus decides to let him live because he fears the Martians may revolt if he is killed. Mark, Amber, and her friends get back from their date. Mark and Amber part with Amber’s friends and Amber kisses Mark’s cheek. She goes back to her dorm, much to Mark’s disappointment.

In the Guardians base, The Guardians have learned that Immortal has married Kate. Immortal tells them that he had already been married 17 times already and he wasn’t looking forward to another wedding. Rex congratulates them on and Kate thanks him, saying that if he had compassion, they would likely be still together. Cecil interrupts and informs the duo that a ship is coming towards Earth. Donald informs them that it’s coming from Mar, much to Shapesmith’s nervousness.

Mark flies to Africa to see Eve. Eve hugs Mark while apologizing about what happened to Mark’s mother. The issue ends with the duo kissing one another.

Retrieved from "https://imagecomics.fandom.com/wiki/Invincible_Vol_1_38?oldid=51625"
Community content is available under CC-BY-SA unless otherwise noted.