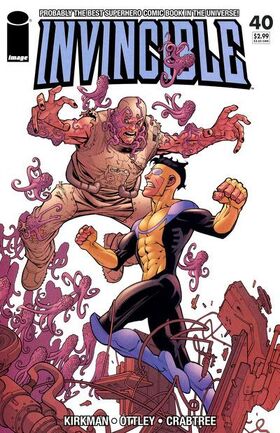 Ray! No! This isn't happening!!

While the team is held in the bubble, Mark, Bulletproof, and The Immortal push the bubble and crashes into the Martian warship. Amanda converts into monster form while the trio burst through the ship. The Martians ready to kill the team. Shapesmith reverts to Martian form to show that they want to help. They realized that he is the “Great Betrayer” and says that he must die. Immortal interrupts and the Martians tells them that Shapesmith is the reason that the Sequids have enslaved the Martians.

Immortal argues that they are there to stop the Sequid because of him. Immortal asks for their help and they agree to help. Eve shows sign of fatigue after dispersing the bubble and sealing the hole in the ship, saying she has not accomplished a feat like that. Bulletproof kills one of the Sequids, mistakenly alerting them of the Guardians presence. The Sequids launch into to them and Immortal begins killing them. Eve makes her suit more dense so that they cannot pierce her skin, but is still exhausted from the feat.

Meanwhile in Wyoming, the Lizard League discuss how they will take over the United States of America. King Lizard says that they will hold the line. Little do they know, Shrinking Ray has open the blast door. Rex and Kate assault them. Komodo Dragon kills two of Kate’s duplicate, worrying Rex. Kate tells him not to worry, as long as one copy survives, she can create more.

Meanwhile on the Martian warship, Immortal sticks his plan of killing the Sequids and the possessed Rus Livingston sees that the Sequid cannot bond with them since their skin is too hard to pierce.

While the Guardians fight, Robot figures out how their one mind works. Robot fires a disruption beacon and repels the Sequids. Eve forms a bubble to keep the Sequids at bay. Amber goes to the movies with Gary. Gary gets a call to come to work because people have quit. Gary refuses to and says Amber already invited him, much to her happiness.

In Wyoming, Komodo Dragon manages to kill all of Kate’s 30 duplicates by smashing, tearing in her in half, much to Rex’s dismay. Iguana attacks Rex while he’s distracted. Rex kicks her back and Shrinking Ray rushes towards Komodo Dragon. Komodo Dragon catches him and swallows him whole. Rex throws a baton, killing Iguana and Salamander in the process.

Eve attempts to maintain the barrier while the Sequids push on it. Robot then readies to prepare the pulse from the components in his suit. Shapesmith reveals that they are smaller ships on the giant Martian warship. Meanwhile, Rex charges a BB to hurt Komodo Dragon, but he catches Rex’s arm and bites his arm off. The BB still be charged and Komodo talking caused his head to explode. A traumatized Rex is held at gunpoint by King Lizard to who manage to stay on the sidelines.

The possessed Rus demands that they surrender to make it easier for them. Eve struggles to maintain the barrier while Robot asks for five minutes to transmit the disruption pulse again. Eve collapses from exhaustion, leaving the team surrounded by Sequid.

The back-up story begins with the Capes, Inc. crew looking around at the wreckage caused by the fight with Chronodile. Later, heroes from all over gather for the funeral of the heroes killed during the fight. Invincible feels guilty that he was out in space during the attack and wasn't there to help. Atom Eve tells him not to blame himself. Heroes all gather around and try to console each other. Over at the hospital, Kid Thor and Knockout miss the funeral because Kid Thor is still recovering. He tells Knockout that he will need reconstructive surgery and might be there for a while. She promises him she isn't going anywhere. That night at Holly Winters's apartment, Commander Capitalism appears to be trying to work up the nerve to propose to Holly. But before he gets the chance, Big Brain flies up to the window and tells him they need to talk.