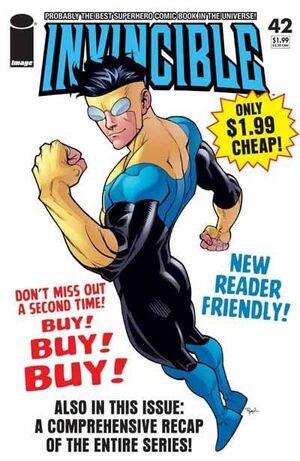 Mark keeps on eye on the astronauts while talking to Cecil. The astronaut help construct a moon base to keep an eye on orbit bases. In the base, one of the astronauts shows disapproval of Mark because of what his father did. A female astronauts tells him how he saved his life and demands that he don’t talk about Mark while she’s around.

Mark flies to Earth after Cecil has him go to New York.

He finds a giant cyclops monster., who has destroyed tanks, cars, and the streets. Mark attacks him, causing him much pain. The monster calls him himself The Giant. He demands to control the world and be made President of the US. The Guardians of the Globe arrive and Immortal threatens to kill him. Mark gets a call and heads into space to move a heavy object off the moon.

Mark goes back to the Pentagon and discuss what happened to the Giant. Cecil reveals that the Giant is an eight year old boy who’s grandmother opened a dimensional portal by using an herbal remedy. He would become enchanted by a sorcerer from there and be turned into a cyclops. He would rule an empire until one of his enemies sent him back. Mark then heads into a room to give a speech about him saving the world.

A reporter asks Mark about how he’s been appearing more publicly. Mark answers that he’s always been doing his part. Another report mentions his father and if he’s feels that he’s making up for his father’s attempt to enslave Earth. Mark says that he’s only doing what’s right.

Mark arrives to his dorm to read his father’s books. William sees a depressed Mark asks him what’s wrong. Mark talks about how much he misses Amber, his grades dropping, and his civilian life. Mark then leaves after William joking suggesting him dating Amber himself. Mark leaves to fight Octoboss. He defeats him but loses much of his costume. He flies back to his house to get clothes. Debbie asks Mark to go see Oliver. Mark and Oliver play catch with Oliver revealing his Viltrumite powers.

Retrieved from "https://imagecomics.fandom.com/wiki/Invincible_Vol_1_42?oldid=51630"
Community content is available under CC-BY-SA unless otherwise noted.