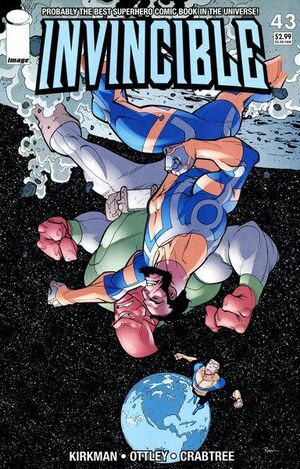 Debbie walks outside after making food for the duo, surprised to see Oliver’s Viltrumite abilities develop. Mark makes a joke about him being his sidekick and she ask the duo to come inside. Debbie begins to talk about how his powers developing can be dangerous as he is young and inexperienced.

Oliver wonders how and Debbie tells her that his strength could hurt her if he since he doesn’t hold back. Mark recalls her being different with him and she mentions that Nolan helped him. Mark then says that he can help him and Debbie brings the fact that he’s still a college student. Mark then suggest that he quit school since he’s failing most of classes and Cecil is paying him more than enough money than he will likely make if he had a career. Debbie says that he won’t be quitting school. Mark then asks her to give a reason why, and she remains silent.

Meanwhile at the Pentagon, Rex is given a new artificial hand to make up for the one he previously from Komodo Dragon biting it off. The hand give him better range as the objects fire after he charges them with potential energy. Eve visits him and Rex asks if he wanted to see Mark. He tells Eve that Mark is no longer with Amber, much to her surprise.

In Utah, Immortal talks with Cecil about how he will cope with being a widow due to the Lizard League killing his wife. Cecil is informed of a projectile in deep space coming and Immortal rushes to orbit to counter it. Cecil learns that it’s an organic being.

Debbie and Mark continue their conversation about Mark quitting school and Oliver developing his powers. They are interrupted by Cecil who needs Mark to go to space.

Allen arrives to Earth’s orbit and sees Immortal arrives, revealing that he can hold his breath in space. He attacks Allen, mistaking his for an enemy. Allen comments that he caught him off guard but his attack didn’t hurt him. Allen then tells him that he will likely be killed by him if he doesn’t surrender. An angry Immortal refuses and the duo charge into each other.

Mark arrives and catches Allen off guard, letting Immortal land a blow on him. Allen charges again, but Mark holds them back, much to Immortal’s confusion. Allen tells Mark that since he doesn’t have telepathy, Immortal cannot hear him. Mark explains that who he is and Allen stops trying to fight. Allen asks to talk with Mark on Earth.

They head to his dorm room and Allen tells him of what he reported to Coalition of Planets and how Mark has inspired their cause. He also tells Mark how he was almost killed by three Viltrumites after reporting and how his near death experience had made him stronger. Mark comments on his larger physique. Allen tells Mark that he only reports to Thaedus as he believes that there is a spy in the Coalition. Allen asks Mark to come to Talescria with him, but Mark refuses. William runs in and suddenly leaves.

Mark reveals Nolan’s capture and how he would be executed. Mark also tells Allen about his brother. He also gives Nolan’s book to him and he reads them, citing that the stories told are very much real. He scans the books for information and leaves Earth for Talescria.

In Utah, Immortal shows that he is under a lot of stress and says that he will resign from his position as leader of the Guardians of the Globe. Cecil makes a call to his secretary to ask Robot become the team’s new leader.

Mark does his homework and William ask that he remind him next time Allen comes around. William answers a knock on the door who is revealed to be Eve. She asks Mark if they are dating since he recently became single.

Retrieved from "https://imagecomics.fandom.com/wiki/Invincible_Vol_1_43?oldid=52397"
Community content is available under CC-BY-SA unless otherwise noted.