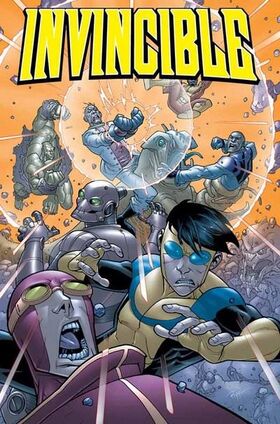 Mark, William, Rick have finished bowling. Mark notices Rick being distant and he tells Mark about him being tramatized by D.A. Sinclair turning him into a Reanimen.

Meanwhile at the Grayson Household, Debbie is visited by Cecil to tell her that he knows about Oliver’s powers. They are interrupted when he learns that Seismic has escaped. He then tells her that he needs to contact Mark.

Mark is in Africa and sees Eve in Africa, much to her frustration. Mark gets a call from Cecil and asks Eve for her help. Mark attempts to apologize for what he said, but she says she doesn’t want to talk about it. They arrive to the location and learn that the heroes were captured and placed underground.

Eve uses her transmutation powers and creates a drill to move. Seismic tells the heroes that he used the Magmanites to find their safehouses. Immortal attempts to escape from his containment bubble, but Seismic tells him the bubble is strong, and if they burst through, they will likely kill those in the bubble.

While Mark and Eve make their entrance, Zechariah turns into mist form and Wolf-Man uses the chance to escape. Seismic uses his wrist bands and calls Magmanite monsters. Eve is knocked unconscious by a monster’s tongue and Wolf-Man catches her. Zechariah attempts to enter it, but is knocked out too. Mark manages to kill one of the monsters, but falls unconscious. Seismic declares his victory.