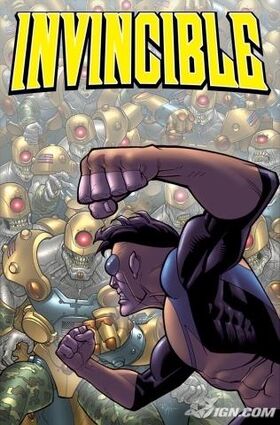 Meanwhile in Pentagon, Cecil attempts to contact Mark and can’t. He asks D.A. Sinclair to dispatch the Reanimen. Mark, Eve, Zechariah, and Wolf-Man are placed back into containment bubbles. Doctor Seismic tells Mark about how he is to blame on why he couldn’t live with the Magmanites.

Mark wakes up from losing consciousness with Eve.

They attempt to think of a plan, but Darkwing II arrives, much to Mark’s surprise. He throws his projectiles and the heroes escape. The Reanimen begin killing the monsters and Darkwing starts assisting other heroes. Darkwing lands a blow on Seismic while the heroes fight off the Magmanites monsters.

Seismic taunts Mark and he readies to punch him. Darkwing pulls him into the Shadowverse and knocks him unconscious. Mark attacks Darkwing since he killed many people previously.[1] Everyone looks in shock as Mark explains what happened. Darkwings defends himself, saying he’s much better now. He attempts to pull Mark into the Shadowverse, but Mark kicks him.

Savage Dragon attempts to calm Mark, Mark pulls away, seeing that he’s defending Darkwing. Mark tells Robot of his incident in Midnight City, but Robot defends him also. Cecil tells Mark to leave and he sits down by a tree. Eve follows him. He asks Eve if she’s seen the news about Darkwing killing people. Eve says no and Mark believes that Cecil covered up the whole incident. Before he leaves, he goes on to say that he would wish to clear things up from what happened previously.[2]

Mark visits Cecil at The Pentagon and demand that he explained why he covered the Darkwing II incident. Cecil defends him by saying that Midnight City was crime ridden and that he cracked under pressure from the constant crime. He also points out how what he did isn’t much different than what Mark did with Angstrom Levy.[3] Mark defends himself by saying that he threatened his mother. He sees Sinclair interrupt and learns that Cecil is having Sinclair work for him. He leads Mark into the white room and unleashes the Reanimen on him.