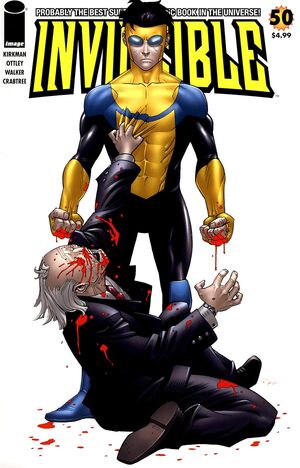 I’d make a deal with the devil if it meant the safety of the planet and the people on it. That’s my job. That’s what I do.

Appearing in "What is This?!"

Plot Synopsis for "What is This?!"

Mark asks him what going on and he reveals that he’s using the Reanimen to defend himself, wishing to not end up like Angstrom Levy. He defends himself saying that Angstrom was an accident. Mark begins destroying the Reanimen and Cecils declares Mark his enemy for attempting to stop him. The white room goes out and Mark is surrounded by Reanimen.

Cecil suggest Mark surrender, but he refuses. He shows Mark that he knows his weakness in his ears by emitting a pitched pulse through his communicator. He tells Mark that they found the weakness by examining him previously when he fought his father. Mark touches his ears and sees that they are bleeding. He also reveals that the pulse will go into a permanent loop if he destroys the transmitter.

Mark attempts to escape, but Cecil uses the teleporter to track him. Cecil reveals that his ears help him in his flight abilities and that the pulse is more harmful to Viltrumites than Humans. Mark moves as swiftly as possible and lands into a Guardians’ base. While he’s disoriented, he asks Robot for his help.

A concerned Rex asks him what’s wrong. Cecil teleports to the Guardian base and Rex asks him to help Mark since someone is trying to kill him, not knowing that Cecil was behind it. Cecil asks them to restrain him and Mark tells Robot that Cecil is employing murderers, citing the Reanimen story which Bulletproof remembers.

Cecil transmits a pulse again, hurting him. Monster Girl converts to monster form, and the other Guardians ready to battle. Rex kills one of the Reanimen and throws a BB at the transmitter, not knowing it will make the pulse constant.

Mark shrieks in pain, while Cecil looks in horror. The Reanimen pummel Mark and Cecil tells D.A. Sinclair to call the Reanimen, but Sinclair says that it’ll take five minutes. Mark manages to fight through the pain and kill five Reanimen with a chop motion. Robot reveals that he found the frequency and blocked it. Cecil then tell the team that they can quit and he does what it takes to save the world.

He terminates his partnership with Mark and he accepts. Before Cecil leaves, Mark charges into him and chokes him, telling him his end of the deal. He tells Cecil that all the money he’s paid him is his and that Cecil is to stay away from him and his family. He also threatens to kill Cecil is he attempts to recruit Oliver.

He asks Robot to get the communicator out of his ear. Mark arrives home to a worried Eve, Grayson, and Oliver. He asks Eve why she was here and she tells him that she was worried about what happened. After explaining what happened, Mark and Eve go outside. He explain to Eve that Monster Girl, Robot, Rex are quitting. He also believes that Bulletproof may quit, but Shapesmith will likely stay with the Guardian if Immortal doesn’t leave. He also says that Kate and Black Samson will likely stay.

Mark asks Eve to speak with him. He apologizes about what happened between them and tells her that he was thinking of her when the Reanimen almost killed him. He tells Eve that he really likes her and Eve reaches for his hand. Eve kisses him and the duo decide that they will start their new relationship as boyfriend and girlfriend, much to Oliver’s dismay.


Appearing in "At Long Last--The Secret Origin of Cecil Stedman!"

Brit emerges from a window while Cecil is talking to him via earpiece. Cecil was captured by a man and woman called The Order of Freeing Fist. Brit interrupts and the man detonates a bomb called Chemical X. The duo achieves their goal as the bomb goes off, saying that their plan was so people would live life to the fullest. The gases burns all of Cecil and the duo’s skin.

Brit, however, is unharmed as his invulnerability make him immune to the effects of the toxins. He calls a med-team and Cecil receives medical attention. Cecil must now wear artificial skin to hide his hideous radiation burns. Cecil would leave part of his skin unpatch to remind himself of what happened and never to allow it again.

Years later, The Lizard League attacks The Pentagon. Cecil helps Radcliffe who would receive scars permanent scars on his face from the incident.

Komodo Dragon arrives and Cecil shoots, though the bullets only bounce off him. The Order of Freeing Fist defeat him and Radcliffe reveals that he faked their deaths so that he could use them for personal protection. Cecil condemns Radcliffe since they killed 15 people. Radcliffe argues that they wouldn’t have made out if they weren’t there. Cecil says that he thank them both and he kills them. The original Guardians arrive to see him after defeating King Lizard, with Immortal questioning what he has done.

Months later, Cecil sits in a prison cell at Stronghold Penitentiary. Radcliffe visits Cecil and asks that he take his place as head of the Global Defense Agency. Radcliffe reveals that he has a side project that requires his full attention. Cecil declines, but Radcliffe tells him that you can be the good guy or the one that saves the world, and how they aren’t the same.

One year later, Cecil accepts the position and would witness Nolan easily kill a monster. He gets a helicopter and goes to him. He asks who Cecil he is and Cecil tells him of his position. Nolan introduces himself and tells him that he’s here to protect the planet. He asks Cecil to introduce him to human customs and behavior so he can better live among Humans. Hours later, Nolan would leave and Cecil learns from a scientist that he was lying about helping people. The scientist asks what he will do and Cecil says “nothing.” He goes on to say that he will make a deal with the devil if it meant that Earth would survive.


Appearing in "Seriously, I'm in No Mood for This!"

Plot Synopsis for "Seriously, I'm in No Mood for This!"

The issue continues from where it left off at Invincible Vol 1 25. Science Dog fires his gun at Walter and says that he’s in no mood for it. While he fights Walter, he attempts to escape and he is teleported out of his clothes. Daniel and Rachel witness it and Daniel decides to go into a fighting robot to kill Walter. Walter attempts to recover from his injuries while Daniel attacks him. Walter uses his telekinesis and attempts to kill Walter. It is revealed that Science was capture by an alien race.

Retrieved from "https://imagecomics.fandom.com/wiki/Invincible_Vol_1_50?oldid=54912"
Community content is available under CC-BY-SA unless otherwise noted.