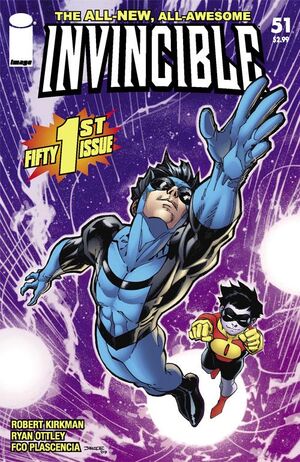 Mark teaches Oliver to control his powers. He starts by taking him flying and Mark reveals that he will get Oliver a costume. Meanwhile at the old Teen Team, Monster Girl, Bulleproof, Rex, and Eve move in, revealing that they had quit the Guardians of the Globe. Rex asks why Eve is there since she was previously in Africa. She tells him of her relationship with Mark, much to Rex’s happiness. Rex’s happiness surprises Eve. Meanwhile in Utah Guardian base, Immortal, Black Samson, Shapesmith, and Kate have decided to stay on the Guardians. Cecil reveals that Darkwing II would be joining the team. Immortal shakes his hand and Darkwing talks about how he is honored to serve with two of the Original Guardians. Shapesmith.

A confused SHapesmith asks Kate who Darkwing is, much to her annoyance. Meanwhile in Titan’s skyscraper, he talks to Isotope about freeing Paul from prison. Titan threatens to kill Isotope he betrays him like he did Machine Head. Mark and Oliver visit Art shop and Oliver receives a new costume, much to Oliver’s excitement. He takes the name Kid Omni-Man. He ask to talk to Oliver and tells him that he cannot have “Omni-Man” in his costume. Oliver defends it by saying that he wants to redeem their father. Art uses the time to get Mark his new costume that has a blue and black color. Art gets a call from Debbie and tells the duo to head to Stronghold Penitentiary.

At Eve house, Eve attempts to let her parents let her move back in. Eve’s father, Adam Wilkins refuses to speak with her since he was mad at her for leaving for Africa. Eve becomes angry, but calms herself. Her mother lets her move back in.

Titan sends Kursk and Furnace to free Paul. Furnace has trouble speaking with Kursk since he only speaks Russian. Mark and Oliver arrive to stop them and Marks tells Oliver to use their superhero identities rather than their real names. Paul hears about the lockdown, relieved that he may finally be freed. Oliver launches into the duo, but Kursk shocks him. Mark grabs a piece of Furnace’s armor and throws it at the duo. Furnace weeps in sorrow, knowing he must repair his suit again while Kursk is being burned by his magmalike skin.

Mark goes to check on Oliver and sees that he’s fine. He also tells him that he should be careful.

Meanwhile in Wyoming, The Mauler twins take over the nuclear silo that was once attacked by the Lizard League.[1] Mark and Oliver arrive home to see Debbie and Paul, kissing. Mark attempts to lie to Paul but Paul learns their secret identities through the news. The news reporters calls Mark “Invinciboy”, much to his annoyance.

Mark goes to the balcony and Eve flies there. He talks about his day and the duo kiss, not knowing an orb is watching them. It is revealed that Angstrom Levy survived his encounter with Mark, but would have a disfigured face and large facial scar across his eye and lips.

The variant cover is an homage to the original issue's cover.

Retrieved from "https://imagecomics.fandom.com/wiki/Invincible_Vol_1_51?oldid=61985"
Community content is available under CC-BY-SA unless otherwise noted.