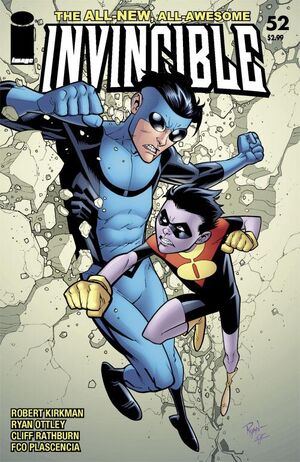 Why should I? How many times have you fought those guys now? How many people have they killed since the first time they fought you? What you do is illogical. The only logical thing to do is to stop these guys—permanently. That’s what makes sense to me.

Appearing in "Mark! Get Down Here, Now!"

Plot Synopsis for "Mark! Get Down Here, Now!"

Mark wakes up and learns for his mother that the Mauler twins have taken over a nuclear silo in Wyoming. They had easily defeated the Guardians of the Globe by using a special gun they built. Mark arrives, but is attacked by one of the Mauler Oliver learns of the battle and goes to help Mark. The Mauler reveal their plans of launching a nuclear missile into the sun to control the technology of the world He kicks a Mauler, but Mark tells him to leave. A Mauler shoots a nuclear missile and

Mark goes into space. Oliver punches a Mauler, breaking his jaw in the process. The Mauler throws over and he recovers. Oliver charges into him and pierces his skin, disemboweling him. The other Mauler surrenders. Oliver uppercuts the other Mauler, pushing his jaw and eyeball out of head, gushing brain matter. Immortal looks in shock and Oliver says it was an accident. Mark catches up to the missile and tears it open, causing an explosion.

Mark is unharmed by the nuclear missile, and two astronauts inform Cecil of Mark’s involvement. The five of them stare in shock at watching Oliver kill the Mauler twins. Cecil arrives and attempts to comfort a distraught Oliver. Mark arrives and suffocates Cecil, holding him with one hand by his neck. He tells Mark about Oliver killing them.

Mark tells Oliver to meet him in the sky. Mark lectures Oliver on why he shouldn’t kill. Oliver defends himself, saying that killing the Mauler twins means they can’t kill anymore. Mark tells Oliver that they shouldn’t kill since it’s wrong. Oliver says he does after the incident with Angstrom Levy. The duo defend them killing, saying it’s an accident. Mark becomes bother about Oliver not caring about him killing the Mauler twins.

Oliver says that not killing them keeps them from coming back and hurting others. Mark argues that there are laws and that what if they kill an innocent person, citing that human life is a precious thing. Oliver disagrees and points out that Humans war with one another and kill each other. Mark comments that he sounds like their father. Oliver asks if he ever wonders if Nolan is right. Mark replies discreetly, “sometimes.”

Retrieved from "https://imagecomics.fandom.com/wiki/Invincible_Vol_1_52?oldid=51636"
Community content is available under CC-BY-SA unless otherwise noted.