"Lock Down, But Not Out" 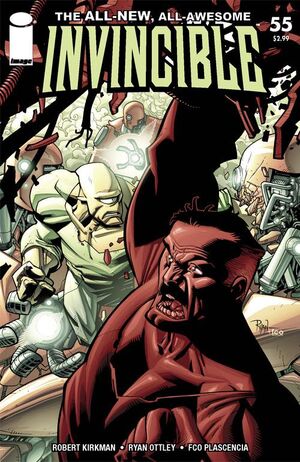 They’re not coming because they’re no one to send. I am confident in this because I know how far away the Viltrumites are. My execution was postponed because they are called away—it was only recently that they were able to send back the two agents required by law for an execution. They had no else to spare. The reason is simple…there are less than fifty pure-blooded Viltrumites left alive in the whole universe. That’s the secret…that’s the thing they don’t want anyone to know…that’s why we can beat them.

Appearing in "Lock Down, But Not Out"

Plot Synopsis for "Lock Down, But Not Out"

Mark and Eve head to his house and Mark asks her to spend the night. Eve transmutates Mark’s clothes off and her too. The duo kiss as they have sex together. Meanwhile, Allen is awaiting his sentence after he has allowed himself to be taken prisoner. Allen would use his telepathic powers to communicate with Nolan. He tells Nolan of his plan to escape, his sons, and his information on the books. He also tell Nolan of his relationship with Telia and how its forbidden for his race.

Nolan would tell his love for his wife and how it is against his Viltrumites beliefs. The duo recalls their battles with one another and how they previously didn’t know who they were. T he duo form a bond and become friends. An enslaved alien race would attempt to kill Allen with no success.

First, they attempted the crush his head, but the device broke. Second, they fired a laser at him, but it bounced off.

He easily breaks his restraints and begins the plan. He breaks everyone out of their cells and sees if they are strong enough to fight. Battle Beast emerges and offers his aid since its brings conflict. They fight off the aliens why Nolan is being beaten. One Viltrumite tell Nolan of his admirance for him until Allen and Battle Beast break through. The Viltrumites become annoyed when they interrupt the execution which is deemed sacred in Viltrumite culture. Battle Beast learns about them and commands the Viltrumite to face him in battle.

Allen breaks Nolan’s restraints and the trio begin to fight the Viltrumites. The freed prisoner then escape. Allen punches a hole in the prison, knowing that the enslaved aliens can’t survive in space. Many of them suffocate. A Viltrumite charges into Allen and Nolan fights him off. The duo ready a punch and smash the Viltrumite’s head, gushing his eyeballs and brain matter. The duo look in shock of Allen’s newfound strength.

Meanwhile, Battle Beast is enjoying his battle with his opponent. Allen remembers that he needs to get his equipment since it has the information on Nolan’s books. Nolan tells him not to worry and reveals that there are less than 50 pure blooded Viltrumites in the universe. He goes on to say that’s the secret and how they can be defeated.

Meanwhile at the Grayson House, Debbie attempts to open Mark’s door and Mark assure her that he is sleeping. After a great night with Eve, the duo kiss.


Appearing in "The In-laws Are Coming!"

Plot Synopsis for "The In-laws Are Coming!"

Retrieved from "https://imagecomics.fandom.com/wiki/Invincible_Vol_1_55?oldid=62702"
Community content is available under CC-BY-SA unless otherwise noted.