"Invincible vs. The Astounding Wolf-Man Crossover! Part 1 of 2" 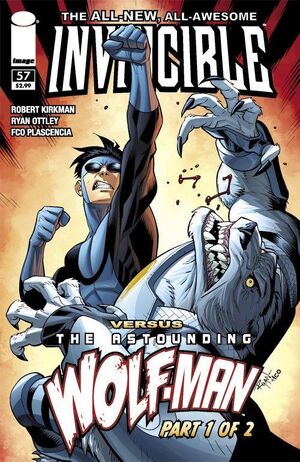 Appearing in "Invincible vs. The Astounding Wolf-Man Crossover! Part 1 of 2"

Plot Synopsis for "Invincible vs. The Astounding Wolf-Man Crossover! Part 1 of 2"

Mark and Oliver head to the Teen Team base to get Robot to analyze the orb that was spying on them. He sees Robot and Amanda playing video games, but Robot assures Mark that he’s can multitask. Oliver observes the duo playing video games and decides to join in. Mark talks to Rex about the new superhero team.

Rex talks about how they stopped the Elephant and how he doesn’t like Mark. Robot finishes the survelliance device, but has no idea who it’s from. Mark believes it’s Cecil and flies over to the Pentagon. Mark starts killing Reanimen and Cecil hears about it. He tells Agent Hunter to wait and sees Mark killing them. Mark tells him that he knows that he was spying on him. Cecil denies and tells Mark not to let his anger get the hold of him. Hunter reports tells him of a subject and Cecil asks Mark for his help.

Meanwhile, the Elder Brood is training Wolf-Man to be a better werewolf. Elder Brood informs Gary of a threat. Gary suits up in his vest and heads to take care of of it.

Mark refuses to help Cecil, but Cecil give him an offer. He offers to look over the orb if Mark apprehends him.

Cecil gets a call that the Giant is has escaped and Wolf-Man is in the vicinity. Gary attempts to subdue Giant, but Giant grabs him. Because of his large size, Giant was unable to be contained. He asks to be left alone and Mark comes in, striking him on the head. Mark grabs his neck and pushes him down. Mark tells him to give up and that people will take him into custody, telling they’ll help him. Mark thanks him for his help against Doctor Seismic, but reveals that he must turn Gary in. Gary attempts to escape, but Mark stops him. Mark refuses to listen to Gary at first, but eventually lets him talk.

Mark says that he needs to taken in because he believes Cecil will recruit him. Mark and Gary arrive to a surprised Cecil and Agent Hunter in the White Room. Mark tells Cecil that Gary wants to talk and Cecil informs him that he will be arrested. Mark then tells Cecil that he won’t let that happen. Cecil has Agent Hunter leave and Mark argues that he has Darkwing II on the Guardians of the Globe. Cecil says that people know about him killing his wife. Mark refuses to let Cecil arrest him. Cecil knowing Mark’s ways unleashes the Reanimen on the duo.

Retrieved from "https://imagecomics.fandom.com/wiki/Invincible_Vol_1_57?oldid=60564"
Community content is available under CC-BY-SA unless otherwise noted.