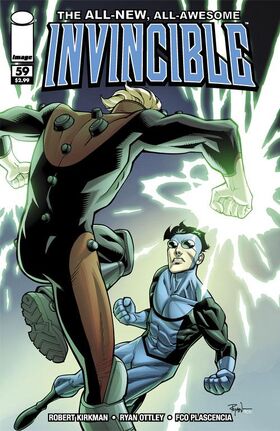 INVINCIBLE!! You think you are above the law---you think your actions hold no consequence! YOU ARE WRONG! You will ‘’’pay’’’ for your crimes against humanity! POWERPLEX WILL MAY YOU PAY!!'

Scott Duvall, going by the name of Powerplex, preparing a speech for when he kills Mark. His wife, Becky Duvall witnesses it and tells him that she liked it. He kisses her on the cheek and Scott goes to shower. A day after, Scott learns from a fellow scientist in the Pentagon that people know someone stealing the bio-therm discs that they developed, much to Scott’s nervousness. The bio-therm discs store body heat and store in back in the body. Scott starts a scene to attract Mark’s attention but he gets Shapesmith’s instead. Shapesmith attacks him and Scott absorbs the kinetic energy from his kick.

He fires it back at him, demanding Invincible. Shapesmith shifts into Invincible and escapes. An angry Becky asks why Scott didn’t tell her about him staging a scene. Scott apologizes for acting too hasty since his superiors know that someone has being stealing the bio-therm discs.

He explains that he needed more to control is to control is natural energy absorption powers since previously the energy he absorbed would leak out. Scott state that his sister, Jessica, was working in a building that collapsing during Mark and Nolan’s battle. Becky understands, saying she loved Jessica too. Scott reveals to her that he will quit his job and dedicate himself to taking down Mark. He stages another incident, but the resigned Guardians arrive. He demands to know where Mark is, but Rex throws a charged batons, not knowing Scott’s powers. Robot complains to

Rex, saying that his baton’s kinetic energy powered Scott. Scott goes home, frustrated by his inability to get Mark to find him. This scares his son, Jack Duvall. Scott apologizes. After Becky puts Jack to bed, he decides what to do. Scott stages a hostage situation with Becky and Jack as his hostages. Mark arrives and demands that Scott let them go. Scott asks him if he knows who his sister is.

Mark says no and Scott tells him that she was an office assistant for an advertising agency. Also, she was paying her way through college. Mark apologizes for what happened. Scott fires bolts of electricity into him and Mark punches him. Scott absorbs the kinetic energy from his punches and fires bolts at him. Mark attempts to free Becky, but she spits on him. Scott kicks him off and he restrains Mark. Becky smiles as he sees Mark get beaten. Scott fires a large surge of energy into Mark. The bolts, however, are too much and kills Becky and Jack.

Scott drops Mark and looks over at his wife and son’s incinerated bodies. He blames Mark for him killing his wife, as he cries. Mark wakes up with the attack having no effect on him. Mark attempts to apologize, but Scott refuses to listen. He fires a bolt of lightning at him. Mark now realizes how his powers work. Mark bearhugs Scott, making waste all of his energy, showing his weakness. Mark looks on in grief as Scott weeps in sorrow. Mark attempts to apologize but Scott refuses to listen. Scott tells Mark that someone will make a mistake and give him enough energy, he will find a way to kill Mark.