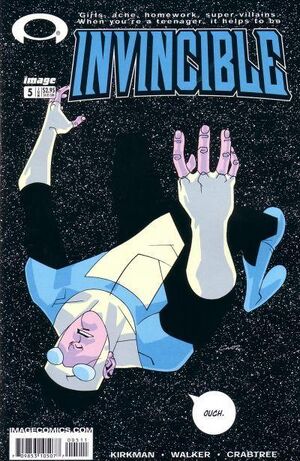 Son, I can hold my breath for two weeks. You should be able to hold out for an hour at least. I've got to go, you'll do fine.

Mark receives a call from his father in his room, telling him of an alien invader coming to Earth. He asks that Mark do the job for him because he is tied up with something else. Mark asks him how will he hold his breath and Nolan claims that he can hold his breath for two weeks, stating Mark can at least do it for an hour.

Mark heads into space and he attacked by the invader. Their battle ensues with Allen having the advantage. He knocks Mark back into Earth, giving Mark a chance to breathe. Mark flies back and crashes him into the moon. Mark suggest that they talk and Allen allows him to.

Allen states that he is a Champion Evaluation Officer for the Coalition of Planets that he checks every 3 years to see if a planet is defense material. He believed that he was checking on Urath, but Mark reveals that he had been coming to Earth the entire time. Mark flies home and tells his father of it, with him being impressed. Mark then heads to his home to do homework.

Retrieved from "https://imagecomics.fandom.com/wiki/Invincible_Vol_1_5?oldid=62900"
Community content is available under CC-BY-SA unless otherwise noted.