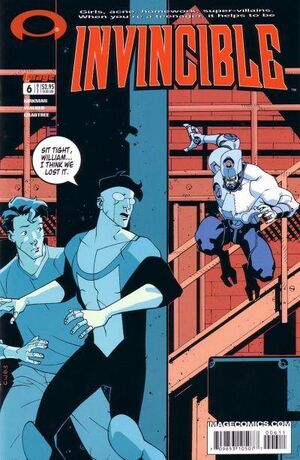 Dude... why didn't you tell me you had superpowers?

Mark and his dad are in the sky playing catch discussing his superhero ventures. Nolan throws the ball around Earth and Mark catches it in the other direction. Mark throws it back and Mark learns that William arrives. Mark gets dressed into his civilian attire and then heads back through his house to catch the ball. While Mark is away with William, Nolan and Debbie use this time to be intimate with one another. Eve and other members of the Teen Team learn that Robot has been invited to try out for the Guardians of the Globe.

Rex and Eve congratulate him and he then disbands the Teen Team, but allows them to use the facility. Black Samson is at his estate and gets a phone call from Arthur Rosebaum, rushing to get his power suit ready. Mark and William arrive at the open house and are greeted by a tour guide of Upstate University. Back at the Grayson Household, Nolan and Debbie had finished their intimate moment and they go again.

While in one of the dorms, they are greeted by Rick Sheriden and they are given a tour of the dorm. After sitting down, they are attacked by a Robot Zombie thing, unbeknown to them. Mark leaves and changes into his Invincible costume. He saves some people along the way and the robot commits suicide. He arrives back with William and he discovers that Mark has superpowers, much to Mark's shock.

While Debbie and Nolan are in the middle of sex, William arrives to drop off Mark with him assuring that he will not reveal his identity as Invincible. Mark then rushes to his room after seeing that his mother's shirt was backwards. An upset Debbie smacks Nolan's arm and Nolan gets a call from Arthur Rosebaum. He informs the duo that Black Samson's power suit was stolen. Eve flies back to the Teen Team bases and notices Rex sleeping with duplicates of Dupli-Kate, crying after realizing he cheated on her.

Retrieved from "https://imagecomics.fandom.com/wiki/Invincible_Vol_1_6?oldid=68286"
Community content is available under CC-BY-SA unless otherwise noted.