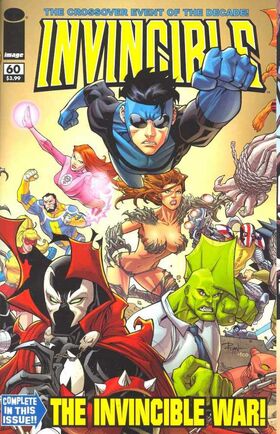 ATTACK Go! Spread out! Move across the globe--destroy everything in your path! Make them see Invincible. Make them fear Invincible. MAKE THEM HATE INVINCIBLE

A few months ago, Mark looks into horror after killing Angstrom Levy. However, Angstrom survived the carnage and opened a portal to another dimension to have his injuries treated. His encounter with Mark would live him with a disfigured face and a large scar that was across his lip and eye. He unleashes the 16 alternate Marks he gathered upon the original Mark’s reality.[1]

Angstrom tells the alternate Marks to go across the globe and destroy cities and that he will fulfill their parts of the bargain.

Mark and Eve are relaxing at Eve’s house. Mark asks to meet her parents and Eve reluctantly accepts. Eve gets a call from the Invincible Inc. phone. Meanwhile, The evil Marks spring into action with one destroying Stronghold Penitentiary, London, Moscow, New York with one fighting Spawn who is using his cape and chains to restrain him. That Mark has claimed to have killed Spawn before. Another fight is: Firebreather in Los Angeles, who in his dimension is “King of The Monsters.” Another Mark is fighting Tech Jacket in Earth’s orbit.

Mark begins fighting his alternate version with a Mohawk, who is evenly matched with him. Mark smashes his temples with his fist and The Capes, Inc crew attack him, mistaking him for the alternate version. Wolf-Man who has been in prison is fighting Thrill Kill who is trying to escape. He knocks him out and sees Powerplex attempting escape. The collapse of the prison provided Scott with energy and he shocks Mark. He sees Mark battling the Capes Inc. and says that he will deal with Mark soon, but not now.

Meanwhile, many people including April, Debbie, Amber, William, and Rick watch in horror as they hear about the alternate Mark laying waste to the cities across the globe. A Mark is attempting to kill Eve and another is fighting Oliver. Meanwhile in the Pentagon, Brit, Donald are finished killing an alternate Mark with Donald losing most of his human skin. Cecil would have his arm broken from the aftermath and tells Donald to call as many superheroes as possible to deal with the evil Marks.

The second day, Donald calls the Dynamo 5, Youngblood, and various other teams. Mark and Eve rushes to assist the Cyberforce in fighting another Mark. Meanwhile, Pitt has managed to kill an evil Mark by mashing his thumbs into his eyes, but not without taking damage. He falls to the ground afterwards. Shadowhawk and Madman attempt to fight Invincible who has claimed to kill his reality’s father. Savage Dragon, Mighty Man, and Angel are having trouble handling a Mark, while Jackie Estacado fights one. Jack Staff, who an evil Mark fought previously in London. Sara Pezzini fights one as well as Ultra. Mark takes an injured Eve to the hospital.

A Mark manages to defeat the Guardians, decapitate Immortal, and kill many of Kate’s duplicates. Darkwing II pulls him into the Shadowline. Mark takes Eve to a hospital. The resigned Guardians are injured by one of them and Amanda is unconscious from the battle. A Mark attempts to kill the injured trio, but Bulletproof holds him off, though previously he lost his hand. Another Mark continues fighting Oliver, calling him a lesser Viltrumite. Debbie and Paul continue watching the news. A Mark attempts to suffocate Savage Dragon.

An injured Black Samson and Shapesmith look for Darkwing, and begin to realize he was likely killed by the evil Mark he took with him. Rex has Bulletproof take Robot and Amanda with him while Rex stays behind. Rex makes a sacrifice to kill an evil Mark. While an evil Mark hold him by his neck, He ignites his skeleton, turning himself into a suicide bomb. The charge kills them both and Robot watches in horror as his friend dies.

Meanwhile, Pitt, Savage Dragon, and the Youngbloods lay unconscious, but an evil Mark lies dead. Mark looks in grief at Eve and Cecil asks for his help. Mark refuses, citing that he has every superhero is helping already. Another Mark is killed by the Reanimen. Sara Pezzini lays unconscious. Savage Dragon looks on at the carnage.

The third day, 8 evil Mark were killed and only 8 have survived. They look on in pleasure after destroying many of the cities including Tokyo, Sydney, Paris, and Seattle. Angstrom arrives to the eight alive Marks and asks them to bring his reality’s Mark. They refuse and he strands the previous dimension he was supposedly killed in. Mark, Oliver, and Bulletproof find him. Angstrom launches his orbs at the trio and knocks two of them back.

Mark crushes an orb after he launched into him. Mark grabs his neck and Oliver insist that Mark kill Angstrom since he has caused all this damage. Mark attempts to kill him, but he escapes through a dimensional portal. Before he does, Mark tears his forearm off. Angstrom returns back and asks the medical team to repair his arm, and they say that Angstrom hasn’t fulfilled his promises and they work for him now.

On the fourth day, many homes and areas were destroyed by the attack. Mark looks in horror of the carnage caused by his alternate versions.