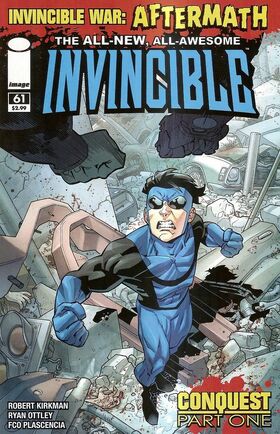 I am Conquest. I have never failed to assimilate a chosen planet, no matter its strength. If you choose to oppose me, you will not survive.

Appearing in "Conquest: Part One"

Plot Synopsis for "Conquest: Part One"

The news report about what happened in the Invincible War.[1] Many cities were leveled and thousands killed. Savage Dragon was interviewed and says that their reality Mark didn’t do it.Mark watches Eve in horror as she clings to her life. Cecil arrives to ask Mark for help in the clean-up effort. Mark accepts, but says that he won’t help Cecil again. The various Image Comics superheroes help with the clean-up of Manhattan and begin saving those who survived the aftermath. Mark is attacked by Powerplex, blaming for causing the destruction.

The Youngblood ready to help Mark and one fires an arrow at him, giving him energy. Mark uses the time to attack him and asks someone to hold him, so he uses his energy. Badrock pushes him to the ground and Mark tells him to fight through the pain. However, Badrock's rock physiology makes him immune to Scott electricity. Badrock takes Scott with him to the teleporter Cecil used.

Scott is baffled at the heroes not helping him, citing that Mark alternate counterparts were killing all those people. Mark looks in depression. Mark goes back to the hospital and tell Eve of how the superheroes working together. Eve’s parents arrive and her father pushes him aside. Mark leaves and her mother follows him to apologize. Mark accepts and she tells him of Eve’s friend who had died in Chicago.

In the destroyed apartment of Rus Livingston, The Sequids possess fireman who are attempted to help anyone who didn’t escape during the fight. Meanwhile at the Pentagon under construction, Immortal is revived after being decapitated. A happy Kate sees him alive and Donald tells him that he can take his leave. Immortal decides that he will be retiring to start a family with Kate, much to her happiness.

Cecil calls upon Black Samson, Robot, Brit, Donald, and Mark to the Pentagon. He informs the four of Kate and Immortal’s retirement, Darkwing II’s death and many of the Guardians being out of commission. He says that world is largely undefended. Samson says that Shapesmith will be fine since his physiology doesn’t work the same way as humans.

He tells them of a core which is the main organ of a Martian. As long as it remains, he can recover. Robot tells him that he will join temporary and Bulletproof’s hand is finished, stating that he was uninjured otherwise. Mark asks about Rex and Robot informs him of his death, much to Mark’s sorrow.

Mark asks why he’s here and Cecil asks him to lead the new Guardians of the Globe. Mark refuses, citing that Eve’s condition doesn’t make him fit to lead. Cecil decides on Brit to lead the Guardians, much to his confusion. Mark leaves and Samson says that he will help as well. Mark begins helping with the clean-up effort and notices many dead bodies, much to his depression. An old Viltrumite arrives arrives to the scene to inform Mark of his Viltrumite duties.

He informs Mark if he hasn’t help take over the planet, he will replace him and he fights back, he will kill him. Mark tells him that it isn’t a good time. The man, calling himself Conquest, tells Mark that the Viltrum Empire knew he would resist, which why he was sent specifically.

He tells Mark that he hasn’t failed in conquering a planet and how Mark won’t survive if fights him. Mark tells him that he was waiting for someone to fight him to get his anger out. The duo charge into each other, causing large shockwave around the area.