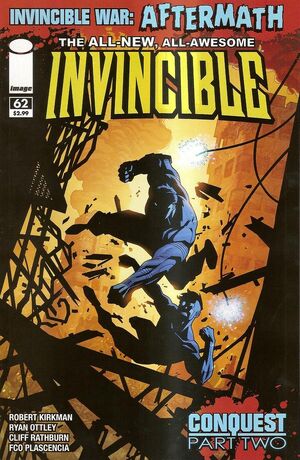 Right now, Anissa would be telling you about how the Viltrum Empire would turn this planet into a utopia. She’d tell you you’re a fool to try and prevent this—that you would be helping the people you believe you are protecting from us. I will tell you any such thing. The truth is I ‘’’want’’’ you to resist. I’m not here because I want to spread the Viltrum Empire. I’m not here because I believe in one cause or the other, or that I’m fulfilling some kind of honorable duty. I’m here because I enjoy this

Mark and Conquest charged into each other and the shockwave causes a large amount of debris to rise up as well as workers losing their balance. Conquest easily overpowers Mark, crashing him through a building. He tells him of how Anissa, the woman came to Mark previously,[1] would be telling him of how stupid Mark would be to stop the Viltrumites from making Earth their planet. Conquest goes on to say that he doesn’t care and wants Mark to resist because he enjoys it.

Mark uses the opportunity to punch him. Conquest isn’t effected and smiles. Mark becomes angry and rushes into him, sending him through building. Conquest lifts the debris and holds Mark by his neck with one arm. Mark smashes his fist on his temple. Conquest smiles and replies “very good.” Mark punches him again and launches him into orbit.

Conquest smiles again and charges him into back to the stratosphere. Mark breaks his hold, citing that he tried it already. Conquest states “enough games” and punches Mark, breaking one of his monocles. Mark flies down at a fast speed while Conquest pummels him. Mark holds hand over his eye, which was severely brushed from Conquest’s punch. Oliver, Debbie, and her boyfriend Paul witness Mark’s battle on the news. Oliver rushes to help him, worrying Debbie. Paul assures her that the duo can handle the battle.

Oliver attempts to catch up to Conquest and Mark, but the duo are moving at a speed too fast for him. Mark attempts to talk with Conquest, but Conquest refuses to stop since he’s enjoying the battle. Oliver ambushes him and Conquest demands to know he is. Mark rushes to save Oliver and throws him aside so he can escape. Conquest pushes Mark down with his elbow at his neck.

Mark headbutts Conquest, much to his amusement. He catches Mark last punch and says if he this is all the strength he has, he will likely die. Under the Pentagon, Cecil learns of the battle and rushes to see if D.A. Sinclair has the 4 alternate Marks ready as Reanimen. Sinclair informs him that their dense tissue makes him unable to cut through to make the Reanimen process. Cecil looks in horror, stating “ then God help us all.”

Retrieved from "https://imagecomics.fandom.com/wiki/Invincible_Vol_1_62?oldid=42441"
Community content is available under CC-BY-SA unless otherwise noted.