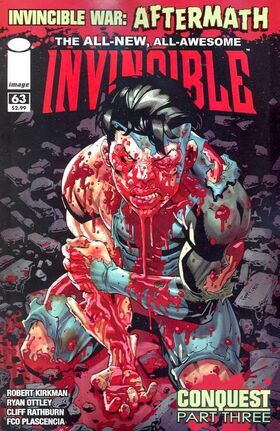 I should do this now--don’t know when I’ll get this chance again. I want to thank you, Mark Grayson...Invincible. Really. From the bottom of my heart. It’s not often that I get to cut loose like this. I mean really cut loose like I have here. Usually, there are so many mission parameters. "Don’t destroy this." "Keep this person alive." But not here—not with this planet. For whatever reason, I don’t really care why, to be honest, I was told--take control, no matter what it takes…take control of the planet. So whatever you did to piss us off--thank you. This has been fun.

Adam and Betsy Wilkins watch the news by Eve as she wakes up. The news mistakenly believes Conquest to be Omni-Man. Eve wakes up after two days of being in a coma, asking where Mark is. She sees Mark fighting on TV and rushes to ready to help. She accidently reveals his identity as Invincible. Eve tells a doctor to get Cecil to transport her to the battle. Conquest tosses Mark around effortlessly and reveals that he met his father while Nolan was younger, showing that he is much older than Nolan is.

Oliver interrupts and catches him off guard and helps Mark up. Oliver uses Conquest advanced age as a reason they can beat him. Conquest argues that him being old doesn’t mean you should underestimate him. He swats Mark away to fight Oliver. He punches Oliver, making lose many teeth, and breaks his arm. Conquest attempts to rip him in half, but Mark stops him. He goes back to fighting Mark and Cecil has a med-team pick up Oliver.

A concerned Debbie learns that Oliver is alive and Paul comforts her. William, Rick, Amber Bennett, Gary, and Art watch in horror seeing Mark being beaten to death.

Conquest launches him into a destroyer ship over an island. Mark punches Conquest and Eve arrives to assist Mark, much to Mark’s horror. Mark attempts hold him off, but Conquest breaks Mark’s leg, causing him to shriek in pain. Eve holds Conquest into a bubble, but he easily breaks out of it. Conquest easily pummels Eve and impales her, nearly killing her in the process.

Mark catches Eve and begs for her to live, grieving and crying. Conquest witnesses him care much for Eve and admires it, thought stating that it breeds weakness for Viltrumites. Conquest licks the blood from his finger and thanks Mark for the battle. Mark says that he doesn’t care how strong or fast Conquest is and says that he won’t live to see tomorrow.