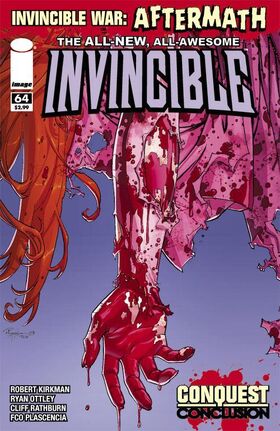 Conquest laughes in Mark’s face after he said before. Conquest tells Mark to do his worst and the duo charge into one another. The duo punch one another, causing Mark to break his forearm and Conquest’s cybernetic arm to be destroyed from the impact. An amused Conquest is distracted and Mark attacks him. Conquest attempts to bear-hug Mark, but Mark bites him, tearing off his muscle tissue.

While Conquest and Mark fight, Eve wakes up from her near death state and rebuilds her body. Mark pummels Conquest until he is distracted by Eve’s revival. Conquest punches while he distracted and Eve fires a beam of energy at Conquest, burning much of his skin. A naked Eve loses consciousness and Conquest goes to kill Eve. Mark begins to pummel Conquest, saying that he won’t touch Eve.

He catches his punch and breaks Marks hand, causing him to scream in pain. An amused Conquest laughs as Mark is in pain. Mark headbutts Conquest to the point where his face is disfigured. Mark loses consciousness and sees a naked and unconscious Eve. Mark tells Eve that he loves her with her returning it. The Guardians of the Globe, Youngblood, Savage Dragon and various Image Comics superheroes arrive to the scene to transport them.

This issue includes a bonus pin-up by Andrew Huerta.

The cover of this issue is an homage to #11's cover.