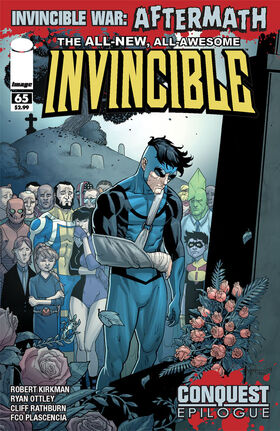 “No, I’m the one who should be apologizing to you, Oliver. The past few weeks, I’ve been training you…I think I’ve learned more than you have. I scolded you…I yelled at you—thought I knew better. I thought you were misguided, naïve—I was wrong. You were right the whole time—but I’ve learned my lesson. Someone tries to hurt my family—someone I love—if there’s another villain out there putting lives in danger—who’s just keep coming at me until they finally succeed…I won’t hesitate to kill them

After three days, Mark wakes up from his coma after being patched up from having his forearm broken, hand broken, skull fractured, and his leg broken. Eve visits him, relieved to see him awake. She asks if he remembers what happened. The thought of it makes him cry and how he thought she died.

She reveals to Mark that with emotional trama, she can use her powers on living, organic matter, overriding the mental blocks installed in her brain by the government. She reveals that it happened to her before. Mark notices the incident had increased Eve’s bust size and this leads to an intimate moment. Meanwhile under the Pentagon, Cecil rushes D.A. Sinclair to finish the Invincible Reanimen to ready for battle.

Mark and Eve’s intimate moment is interrupted by Debbie and Paul interrupting. Eve wipes her lips and apologizes. Debbie sees Mark and begins to cry tells Mark that he doesn’t need to be a superhero anymore. Debbie leaves with Paul and Cecil enters. He asks Mark to talk and Mark asks where is Conquest. Cecil shows him the dead body. Mark sees the body and goes back to Eve. Mark goes to see Oliver, but Eve tells him that she can’t go with him. She informs him that Rex’s funeral is happening. Mark asks to come along and she accepts. Mark, Eve, and various Image Comics superheroes including

Robot, Bulletproof, Brit, Capes, Inc, The Immortal, Dupli-Kate, Savage Dragon, Superpatriot, Donald Ferguson, Black Samson, and various others. They look on in grief as many of them had befriended Rex. Robot gives a speech about how he was annoyed by Rex at first, but would idolize him for his confidence. He also decides that he will change his name to “Rex” to honor his deceased friend. A concerned Amanda tells Rex that she loves him after seeing him give a heartfelt speech.

He offers Eve to give a speech. Eve tells the crowd about how she felt about Rex, but is overcome with grief. After the funeral, Mark goes to see Eve. Eve tells Mark that she regrets how she treated him and that he was maturing. Eve reveals that she loved Rex and she started liking Mark while she was with Rex. Mark listens to her talk and smiles and glad to see that’s okay. The duo kiss.

Mark and Eve to his house and begin to become intimate with one another. Eve uses her powers to remove his clothes. However, it doesn’t properly, and the clothes are a mixture of

Meanwhile another dimension, Angstrom Levy is given another cybernetic hand. He asks the med-team what they want from him. The trio insist that they will use Angstrom, stating that this only the beginning. It is revealed that the Sequids are possessing more people in their plot to take over Earth.

In a remote location in the Mojave Desert, Donald would go with Cecil to an outpost. It is revealed that Cecil constructed a fake body of Conquest and he is alive. Conquest is healing and is placed in a 400 ton prison below the Earth. Cecil plans to interrogate him after he heals, wishing to learn about what the Viltrumites pose to Earth.

Mark goes to visit Oliver and they talk about the events. Oliver reveals that he will be out in a few days and Mark tells him that Eve’s powers aren’t working properly. Mark screams in anger for not being able to protect him. Oliver apologizes and Mark tells Oliver that he should be the one who’s sorry. He goes on to say that if someone threatens his family or the world, he won’t think twice about killing them.