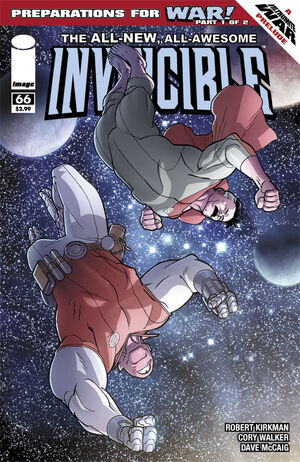 Nolan of Viltrum--give me one reason not to kill you where you stand.

Appearing in "Preparations For War: Part 1 of 2"

Plot Synopsis for "Preparations For War: Part 1 of 2"

Nolan and Allen continue from where they left off after escaping Viltrumite prison. Nolan tells him the truth about the Viltrum Empire and why their population is so low. He tells Allen about how the Viltrumites valued strength and killed off their weak from the planet. Afterwards, the empire would pursue to conquer planets and would do so for a millennium.

A virus would made by their enemies. Kregg would lose his eye from the virus’s infection. The virus would cause a mass genocide to the Viltrumites. Few would survive, but it would cost them their strength and invulnerability. One being Conquest who would lose his forearm, his eye, and receive a facial scar by the Ragnar. Those who died would be tossed into space and their bodies circulate like a ring around Viltrum, similar to the planet Saturn.

Decades would pass and more Viltrumites would die. The Viltrum Empire endured and began to spread reports about Viltrumite ranks thinning and the High Council began thinking of way that only Viltrumite would be needed to conquer a planet. Viltrumites would crossbreed with other races to ensure their survival, though once forbidden. The results would be mixed until Earth was found, until Nolan’s son. Nolan discovered that Human DNA is almost 100 percent compatible with Viltrumites due to their biological similarities. Earth would become a breeding camp to restore the Viltrum Empire ranks.

The Scourge Virus would be removed from Viltrumite records, but would be a symbol to what the Viltrumites have sacrificed in their planetary conquest. Allen suggest they warn Mark, but Nolan says that they must go to Talescria. Allen goes to get his gear and the duo head to Talescria. Allen arrives home to his girlfriend, Telia, who is sexually hungry.

She notices Allen sleeping on the couch and attempts to sleep with him. Telia looks over behind her and sees Nolan there. She fires a laser at him, though the latter only destroys his clothes. Allen defends Nolan as he help in the escape effort. Two aliens talk of Nolan and Allen meeting with Thaedus after getting the information from Nolan’s book. They learn that information is accurate and are processing information. One speaks of Allen’s newfound transformation scaring them.

Nolan and Allen meet with Thaedus and share the information of the Viltrumites’ mass genocide, much to Thaedus’s shock. Thaedus reveals his Viltrumite origin and Nolan asks that he remove his beard to show his Viltrumite origin. Thaedus says he would do so, but doesn’t care much for it. Allen says that he has done it already. Nolan is in shock, believing himself to be the only person to betray the Empire. Thaedus reveals that his betrayal was removed from historical records.

Thaedus reveals that there is a double agent in the Coalition of Planets and tells Nolan and Allen’s missions will be reported to him only. He gives them an hour to get suited to begin. Allen and Nolan don new costumes and go out in search. They arrive to the galaxy’s Nebuloid Belt and asks Allen to follow him. Nolan finds an asteroid with the location to their destination, a location that he was at almost a century. He finds the item he was looking for, a gun belonging to Space Racer. Nolan asks him if he knows about him. Allen reminds him that he called him Space Rider and that he doesn’t know who he is. Nolan states that he needed to change the name to keep from enemies.

Allen asks why he didn’t take it with him and Nolan reveals that he has bond with the gun and that it would have destroyed the rock that keeping him buried. He also revealed that his gun can only be fired by him and his gun can shoot through anything. Nolan attempts to grab the gun, but it moves into the asteroid. Allen and Nolan remove the rock and it is revealed that Space Racer is alive, showing his great metabolism from being able survive almost 100 years without food or water.

Retrieved from "https://imagecomics.fandom.com/wiki/Invincible_Vol_1_66?oldid=42445"
Community content is available under CC-BY-SA unless otherwise noted.