"Preparations For War! Part 2 of 2"
Part of the Image United 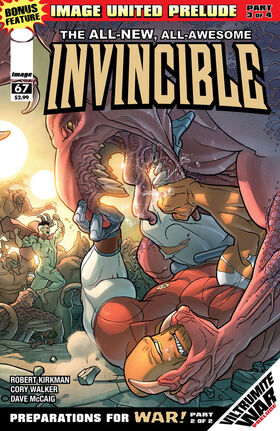 Yes, an improved strain that would circumvent any immunity developed…and if although it means suicide for our people, for us and the potential extinction for our people…if I believe our cause to be lost, I won’t hesitate to use it again.

Appearing in "Preparations For War! Part 2 of 2"

Plot Synopsis for "Preparations For War! Part 2 of 2"

Nolan and Allen rush to restrain Space Racer. Space Racer fires his gun with the blast destroying an asteroid and causes a chain reaction that destroy other asteroids. Space Racer summons his hover motorcycle and knocks Nolan away from him.

Nolan asks him to listen and Space Racer asks why. Nolan tells him that they came to free him, but Space Racer argues that they only wanted his gun. Allen steps in and introduces himself. He also states that Nolan is helping the Coalition of Planets and that they were there to retrieve the gun, believing him to be dead.

Nolan apologizes for what he did to Space Racer. Allen asks him to come with them to Talescria and Space Racer asks them if they have food. Allen offers him Kanslok and makes a disgusted face at the sight of them. Space Racer accepts, but says that he will be behind in case they betray him. He arrives to an amazed Thaedus, who doctors are examining, shocked that he was able to survive without food or water for almost a century. Thaedus gives them their leave and Nolan asks where he will stay. Allen offers for him to stay at his house.

An aggravated Nolan sleeps on the couch with two pillows on his ears to block out Allen and Telia having sex. On the next mission, the duo go to the planet inhabited by Ragnar, creatures who are said to be able to kill Viltrumites.

Nolan tells Allen that teams were sent to kill them, but they were unable to accomplish. Nolan would come up with the idea to freeze them by using a solar disk to block their Sun. Nolan asks a Talescrian ship crew to remove the solar disk. They fire and destroy it, much to Nolan’s frustration and anger. Nolan grabs a Ragnar, but it thaws out and starts attacking Nolan.

Meanwhile in the ship, the commander asks for a report, noticing that Nolan’s heart rate doubled. Allen reports that the Ragnar are completely thawed out and they will attempt to escape. Nolan reveals that Ragnars are know to eat Viltrumites alive. Allen rushes to save Nolan, but is attacked by two Ragnar. One attempts to eat Allen, but Nolan rushes in to save him. The duo manage to escape, but Nolan’s Viltrumite temper make him refuse to get on the transport ship.

The duo report back to Thaedus from the mission with Nolan breaking his arm in the process. Thaedus thanks them for trying and says that he has a short temper like Nolan and thanks him for showing restraint. The duo go on various missions.

First, they would to get Klaxus plants, plant that he can weaken Viltrumites and grows at an enormous rate. He also reveals that the plant doesn’t need much water or sunlight to grow. They retrieve the Sinlak beetles the Viltrumites used to stop the plant from growing to extract their glands. They also visit Gelederia to ask for aid. They tell them of Tech Jacket (Zack Thompson) and how he can be help in their effort. They would also attempt to retrieve Space Sharks, but dry their ocean and kill them off.

They would also visit Battle Beast’s home planet to ask for his aid. Their ruler reveals that he was a planet guardian and him defending the planet would help them achieved utopia. He also goes on to say that the constant conflict would make him addicted to it and he would leave the planet in search of worthy opponents. He also says that he hope live long enough to see him return back.

He asks Nolan to get his son and Tech Jacket for the next battle. He also reveals that he thought the Viltrumites were evil and founded the Coalition of Planets to stop them.

He also reveals he used his own DNA to create The Scourge Virus, though not knowing that it would cause the Viltrumites’ mass genocide.

He tells Nolan that there is an improved strain to override any immunity that the Viltrumites have to the previous. He goes on to say that even though it caused a mass genocide, he won’t hesitate to use it again if they are close to losing.

Doctor Seismic is fighting Fortress who is using his bands to push him back. Savage Dragon attacks him, but Seismic launches him back. Fortress goes to help Dragon and attempts to bearhug him. This causes him to absorb Seismic powers and Seismic falls unconscious. The duo look in shock as a blue energy comes from Seismic’s eye.