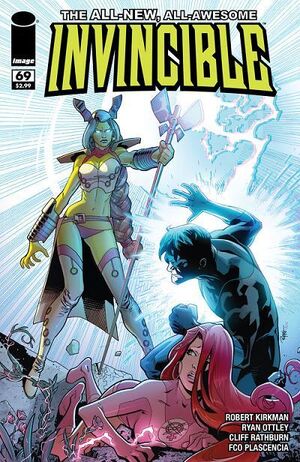 A warrior queen from a far away planet named Universa has come to Earth in search of something. Meanwhile in Houston, the Sequids have populated at a large rate and threaten to take over the Earth. Universa arrives to a power plant to steal its energy.

Mark notices that Eve is distant from him. Eve says that she’s worried about her powers and they get a call from their Invincible Inc. business. They learn that a nuclear power plant is under attack. Mark gets suited up and takes Eve with him.

Universa begins attacking the power plant and wishes to store the energy to save her people. Mark and Eve arrive to stop her. Mark grabs her staff and she throws him away. Mark demands that she stop and knows that she’s after energy, believing they can find a solution. Universa reveals that her planet is 8 times the size of Earth and that the Earth would be out of energy.

Meanwhile, Brit, Bulletproof, Black Samson, Monster Girl, Robot, and Shapesmith ready to fight the Sequids. Cecil sets up a containment barrier so the Sequid can spread. The Guardians spread out and Brit informs them that the disrupter bracelets Robot created must be used to take the Sequids off their host. He also says that those without a host will be hit with teleporter darts to transport the victims to a shelter. Robot fires a disruption pulse and Bulletproof fires teleports darts on 3 citizens. Since’s Amanda skin is in monster form is harder to pierce, the Sequids are unable to latch on. Universa fires her staff at Mark, knocking him down. Mark punches her and tells how he is uncomfortable with striking women.

Universa fires a bolt of energy at Mark. Mark questions what she’s carrying and she reveals it to be the Staff of Leadership, an ancient weapon from her planet that was passed down for millennia. The staff fires two distinct energy pattern with enough power to level cities. Eve transmutates her hand into a rock formation and ambushes Universa. Universa strikes back and Eve uses her transmutation, but it creates flowers instead.

Mark jumps in front of Eve to protect from a blast. Universa goes on to say that it pains her to kill someone who sacrificed themselves for who they love. Universa readies to kill Eve, but Mark grabs her staff. The staff shocks him and he falls. Universa reveals that only a person chosen by the “World-God”, can wield it. Eve punches her and easily defeats her, revealing that her superhuman abilities are powered by her staff. Cecil arrives to tell Mark about the Sequid invasion. Meanwhile, The Sequid possessed Rus Livingston manages to overwhelm the Guardians.

Retrieved from "https://imagecomics.fandom.com/wiki/Invincible_Vol_1_69?oldid=51643"
Community content is available under CC-BY-SA unless otherwise noted.