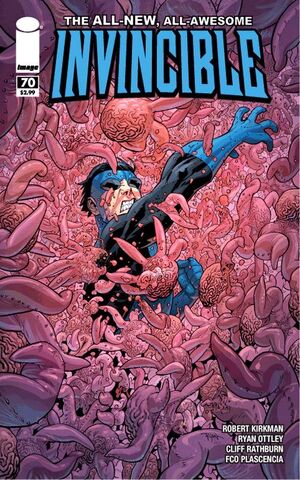 It is revealed that the Guardians let themselves to beaten so that Robot can devise a plan. Robot lives his suit and goes through a sewer to find the Sequids source. Mark arrives through a teleporter Cecil sent him through and grabs the possessed Rus. Mark demands to know why they’re back and the possessed Rus reveals that they never left Rus’s body. Mark realizes their plan of taking over the Human race so that they would never run out of hosts, with the Sequids confirming it.

Mark thunderclaps, repelling the Sequids. While the Guardians fight off the Sequids and save citizens, Robot attempts to find out where their host is in the sewers. Mark land on Rus, reminding him that he isn’t playing around. The Sequids attempt to restrain Mark, but he easily overpowers them. Robot finds the underground host and the host sends Sequids after Robot.

Bulletproof, Black Samson, Monster Girl, and Shapesmith rescue victims. Robot repels the Sequids with a disrupter bracelet and uses a teleport dart to evacuate a citizen. He unleashes the Sequids on Monster Girl, causing her to revert to human form. Bulletproof fires a disruption pulse on Rus and he has the Sequids destroy the bracelets.

Mark allowed himself to get captured so that he could get close to Rus. Mark states that he was holding back on purpose and he knows of the threat he poses. Seeing no other way to stop them, Mark decides that in order to stop them, he must kill their host.

Mark decapicates Rus, much to the shock of the Guardians. Robot is shocked and says that they couldn’t have found another way, citing that Mark didn’t have to kill him. Cecil and Donald see Mark firsthand kill him. Cecil goes on to say that he doesn’t need to worry about it and asks Donald about the Sequids. Donald states that they will produce a pathogen to kill them and says that it will take about two weeks to move the carcasses.

Meanwhile at the Grayson Household, Oliver impresses his tutor with his accelerating learning and how he will likely be college ready. Oliver asks her how long will it take to be an adult. She believes that it might be a year or two. Mark arrives, upset and goes upstairs. In Utah, Amanda and Robot talk about Mark killing Rus. After Amanda tells him that he stinks, Robot goes to take a shower. Robot coughs out a Sequid and reacts fast enough to crush it, saving himself from possession. Mark tells Eve about how he felt it was necessary to kill Rus Livingston and how he is losing control. Cecil arrives through a teleporter, asking Mark to talk.

Retrieved from "https://imagecomics.fandom.com/wiki/Invincible_Vol_1_70?oldid=54854"
Community content is available under CC-BY-SA unless otherwise noted.