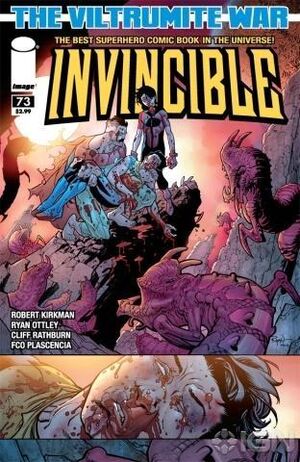 Appearing in "The Viltrumite War, Part 3"

Thaedus becomes angry after the ship captian that was transporting Nolan, Mark, Oliver, Allen the Alien, and Zack was destroyed. The ship captain apologizes for what happened to who he calls “Great Thaedus”. Thaedus apologizes asks him to leave him. His attendant calls to call upon an assembly.

On the planet they are stranded on, Nolan had finished burying Conquest, much to Oliver’s digust. Oliver argues that he had done horrorfic things and Nolan says that Conquest was one of the Viltrum Empire’s greatest warriors, mentioning it deserves a certain amount respect. He also says that he may have lost his way, but his loyalty to Viltrum makes him arguably a better man than Nolan. Nolan and Oliver go to check on Mark, who had been disemboweled from the battle against Conquest. Nolan had torn off his cape to keep his intestines in tract while he heals. Nolan reveals that Mark’s injuries will take him months to heal, but says it isn’t bad. Oliver asks why and Nolan reveals that it will give him time to get to know Oliver.

Meanwhile, a Coalition ship is sent to retrieve Battle Beast, who had survived months in the frozen depths of space without food or water. It is revealed that he killed his Viltrumite opponent. While Thaedus checks on the Scourge Virus before he is called. The alien duo reveal to Thaedus that the Klaxus plants extract are effective against Viltrumites. They also reveal that the attack on the ship captain, who’s name is revealed to Pikell, requires retaliation. Thadeus gives the order to begin their assault.

Nolan kills an animal so that Oliver and him have something to eat, having not eating for two weeks. Oliver initially refuses, but comes to enjoy it. The duo eat their food raw, showing that Viltrumites can eat raw food without suffering the same effects as Humans.

Meanwhile on the hidden Tech Jacket, Zack gloats about his facial hair growing, much to Allen’s annoyance. Zack reveals that the Tech Jacket cleans him and was most likely shaving him too. Their conversation is interrupted when the Coalition of Planets found the tracking signal is Allen’s equipment, which would be undetectable if the frequency isn’t known. The duo leave and see Space Racer arrive with Coalition troops. Nolan asks Oliver to keep Mark hydrated while he heals.

Oliver asks if Nolan loves Debbie. Nolan says that he is sure and that he explains that Viltrumites are capable of affection, but says that their millennia lifespan makes them distant towards themselves. He goes on to say that he didn’t believe that he could care for her, but overtime raising Mark made him love them both. He says that when he chose to carry his mission, he beat Mark and he knew that he made a mistake.Thaedus tells Allen and Zach that they will be going to the planet, Oola, in a few hours and they need them battle ready. Zach mentions that he’s growing a beard, much to Thaedus and Allen’s annoyance.

Meanwhile, Oliver tells Nolan about his time on Earth. He says Nolan’s that his affection towards his mother was odd to his mother’s people. Nolan tells Oliver that she was a good person and that their short lifespans is unfortunate. Nolan reveals that he will live for centuries if not thousands of years. Oliver goes on to say that the Viltrumites believe him to be weak, much to his anger.

They arrive to the nest of the creature they had ate previously. Oliver eats the creature, much to his enjoyment. Allen and Zach attempts mission such as capturing planets and attempt to catch the Ragnar. Oliver and Nolan enjoy the time they have together. Nolan feels Mark’s spine and says that now his spine has healed from being impaled. Now that Mark’s bone is done rebuilding bone, he will heal much faster.Thaedus reports the progress to Allen and Zach about the Ragnar.

Thaedus says that they can survive in space unharmed and that a tether system will be built. Meanwhile, Oliver and Nolan spare so that Oliver can become stronger, such as fighting and have Oliver carry heavy objects. Thaedus tells the duo that Battle Beast has agreed to join the Coalition and that they lost of the planet Oola.

Thaedus reveals that they are getting planets but are losing planets since they Nolan and his son aren't there. Mark mumbles the words “kill you.”, revealing that he is regaining consciousness. One alien is talking to his information partner who reveals that Battle Beast is fighting constantly and refuses a leave of assistance.

Thragg addresses the larger one and says that they will be attacking Talescria, asking it to take down the planetary barrier. The larger alien responds it will be done, revealing who the double agent is in the Coalition.

Retrieved from "https://imagecomics.fandom.com/wiki/Invincible_Vol_1_73?oldid=62704"
Community content is available under CC-BY-SA unless otherwise noted.