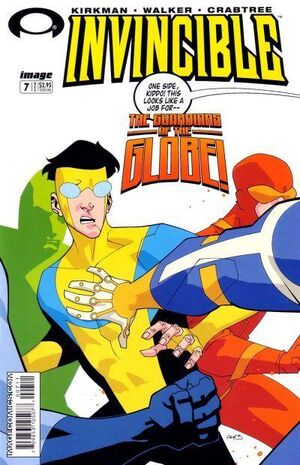 You! I never liked you.

While Mark is resting from days of being a superhero, The Guardians of the Globe spring into action. In Midnight City, the forever twilight city due to the Midnight Magician's suicide, Darkwing stops two thieves attempting to carve into Burn Towers. Darkwing deals with them and receives a call from the Guardians base. He hops into his Wing Jet and flies away, while ordering his butler Belvedere to have his sidekick, Night Boy take care of the criminals.

Meanwhile in Moscow, Russia, Red Rush stops a mugging, defeats Kursk, and saves a cat stuck in a tree. He returns to a picnic he's having with a woman who notices he is in a costume. He quickly changes out and then receives a call from the Guardians base as well.

In Boston, War Woman is sleeping in while her girlfriend is making breakfast. War Woman kisses her on the cheek and is uninterrupted by a statue, demanding that War Woman return with it, citing that her mother is worried. War Woman rebuffs saying that she goes where she pleases. She beats the statue by shoving it out of the building and receives a Guardians call.

In Atlantis, Aquarus receives a call and heads up upshore, finally eager for some action.

In Outer Space, Martian Man and Green Ghost defeat a machine and return to Earth, only to be called as well.

In Denver, The Immortal fights Bi-Plane and easily defeats him by throwing him into space. Bi-Plane was going to die from cancer anyway. The Immortal receives the call and heads to the Utah base. He says the secret password (Rumplestiltskin) to enter. He finds all the Guardians there with him. They are confused because since the rest of them were already there, they jumped to the conclusion that the Immortal called them.

Before they could think, the assailant smashes Aquarius and Red Rush's face together, decapitates Green Ghost, snaps War Woman's neck, disembowels Martian Man, and impales Darkwing. Immortal looks around at the carnage and notices the person who did it. He says "I never liked you" to the murderer. Immortal is then decapitated. The murderer, Nolan Grayson, reveals he called the Guardians to get in one place to kill them. Nolan then tells the decapitated Immortal that "the feeling was mutual".

Retrieved from "https://imagecomics.fandom.com/wiki/Invincible_Vol_1_7?oldid=61488"
Community content is available under CC-BY-SA unless otherwise noted.