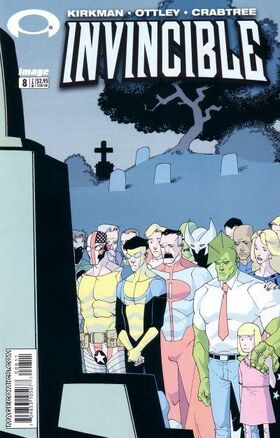 Mark... we've got a funeral to attend tomorrow... The Guardians of the Globe are dead.

Damien Darkblood and Nolan Grayson talk about Black Samson being the possible killer of the Guardians. They discuss his power suit being stolen and how it would be impossible for him to kill all of them even with his powers.

Meanwhile, a distressed Eve flies into Mark's room and Mark flies in next, discovering her crying. She reveals that Rex cheated on her with multiple Kates. Mark's mom discovers them and demands that they come downstairs. She asks that they be careful.

Nolan arrives to reveal that the Guardians of The Globe were killed. He asks that Mark get ready for their funeral. The next day, William Clockwell and Mark converse and a cute blonde girl gives Mark a pink envelope. They notice that Derek Sanders is back from school after his change by David Hiles. Mark greets him with a welcome back, much to Derek's happiness. Mark tells William that he cannot go to Burger Mart with him and Chad because he has to go to a funeral. Eve arrives and William and her attempt to not tell much about Mark's second life before leaving.

Mark stops the Elephant and heads back home with his dad.

Nolan preps for the funeral and Debbie reminds him of Mark's 18th birthday. Debbie notices a grief stricken Nolan and attempts to comfort before he leaves. Kurr Dragon is speaking with Darkblood about Samson and other Image Comics heroes arrive to the funeral. Nolan gives a speech about the deceased Guardians notices the Mauler twins. They tell him that they only want to pay their respects to them. Mark assures them he'll keep an eye on them and Sanford disrupts the funeral, blaming the Guardians for Samson losing his powers.

The heroes prepare themselves and Mark moves Art out of the way. Sanford is defeated by one blow from Nolan. Samson comforts an unconscious Sanford. Nolan comforts Aquarus's wife, widowed from his death. Mark and Savage Dragon discuss the Mauler twins' presence and realize that they are up to something. Mark and his dad leave.

Eve arrives to the Teen Team Base and notices Rex flirting with Kate. She quits the team in anger.

Mark goes to his room and opens the letter give to him by the cute blonde girl. It contains her phone number and William throws a rock at Mark's window. William then asks Mark to take him flying, much to Mark's disgust.

Meanwhile, Nolan and Debbie are discussing Nolan's mental state with Nolan assuring her he's fine. A drunk and angry Derek urinates on David Hiles's grave. Two graverobbers attempt to dig up The Immortal's grave, believing that drinking his blood would make them immortal too. The Mauler twins reveal themselves to them, attempting to take the Immortal's body for themselves.