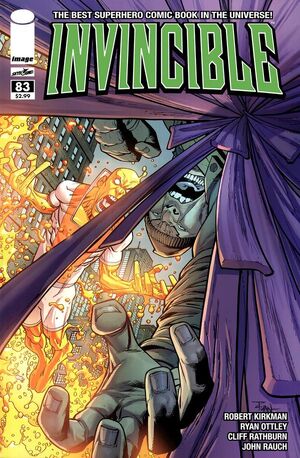 Meanwhile in New York, Magmaniac and Tether Tyrant manage to get back into business with Titan after the debacle of The Order. Titan tells the duo that he can use them if they are willing to take things to the next level.

Mark heads back to his house and sees that Eve has brought new stuff for the house. Mark mentions that he saw the eight version of him that died and the duo head to the welcome back party for Robot and Monster Girl, which other members of the newly expanded Guardians.

Amanda is approached by several men including Black Samson, Kid Thor, Bulletproof, Kaboomerang, and Shapesmith, envious of her older, more attractive appearance. Rex looks at them in grief. Knockout pulls her fiancé, Kid Thor away. Mark and Eve go to see Rex and notice that he is acting differently towards Amanda.

James and Tether Tyrant arrive back at their apartment. Magmaniac leaves to stake out Machine Head’s place. Tether Tyrant takes off his appendage who he speaks to. He gets the feeling that the appendage wants a permanent bond with him, but he refuses. Meanwhile, The welcoming party ends Bulletproof attempts to seduce Amanda. He asks if Rex and then ended and Amanda realizes what Bulletproof is trying to do. She apologizes as she is out of sync with Human behavior and says that it won’t happen.

Mark and Eve head back and talk about what happened. Eve talks about how she won’t get used to calling him “Rex” and Mark realizes that he looks more and more like Rex now that he’s older. Eve does a seductive pose and attempts to seduce Mark. She asks he have sex with her in his parents’s bed, much to his disgust.

Tether Tyrant and Magmaniac attack Machine Head’s store. Magmaniac blasts a large amount of lava at him and kills two store shoppers. He unleashes Vault on the duo and Tether Tyrant gets a hold of Vault. Vault uses electricity to release himself and goes after Magmaniac.

Vault realizes that Magmaniac consciousness exist in an electrical state that allows him to melt and harden his body at will. He claps his hand and smashes his head, killing him. Tether Tyrant looks in horror after seeing James die. An enraged Tether Tyrant tells his appendage to do a permanent bond.

In his subconscious, Tether Tyrant realizes that his appendage has taken control and he has lost his free will. He demands that it release them. Before then, he had gone a four hour rampage, unaware of the destruction he had caused. The Guardians of the Globe arrive and he regains control to surrender, much to their surprise.

Brit takes him into the custody of Rex’s skycycle. Mark arrives to see that the battle is over, much to his surprise. Cecil Stedman apologizes for waking him up early. Mark asks he sleeps. Cecil reveals that he doesn’t and takes one hour baths, much to Mark’s disbelief.

In Utah, Rex had finished showing and Amanda notices him. The duo stare at one another. Rex makes small talk and Amanda asks she wants to talk about what happened. He begins to cry, commenting that he wants to forget what happened in the Flaxan dimension.

Retrieved from "https://imagecomics.fandom.com/wiki/Invincible_Vol_1_83?oldid=51650"
Community content is available under CC-BY-SA unless otherwise noted.