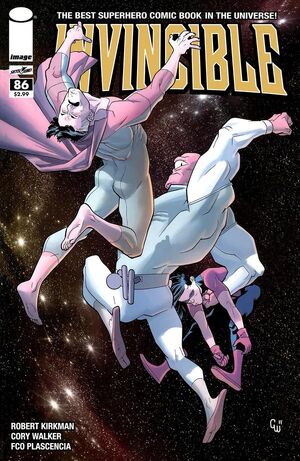 Nolan and Allen begin fighting and Nolan knocks him back. Allen takes him out of the building, seeing that their battle with likely destroy it. Nolan asks Allen how it is any different than what the Viltrumites did to his people. Allen argues that though Humans will be extinct, their sacrifice will help the entire universe.

Nolan is saddened by Allen and tells him that he can’t do this. Nolan launches Allen into Talescria’s orbit and says that he will beat the sense into him. Allen reveals that he purposely let Nolan beat him and shows him that he is much stronger than Nolan.

He pummels Nolan, causing him to bruise and says that after he’s done, he will see that it was the right thing to do. Oliver interrupts, confused on why Allen is fighting his father. Oliver kicks him in the groin, much to his pain and dismay. The Talescrian Military arrive and he explains.

He explains about the virus he has will kill the Viltrumites and possibly humanity too. Oliver agrees with Allen’s idea, much to Nolan’s shock. Oliver explains that there are only a few people he cares for on Earth and doesn’t care about the rest of the human race.

Nolan asks that Oliver hear his side. Nolan explains that the affections humans have for one another is what changed him and how raising Mark changed him and taught to love. He explains that he was no different than other Viltrumites and believes that Earth will change them. Oliver argues that he’s read about their history and sees that they only care for each other, stating that they are no different than Viltrumites. Allen asks his military to restrain him.

Nolan breaks out his restraints and heads for Allen, but Oliver intervenes. He grabs Oliver’s throat, but can’t fight his son as its similar to what he did to Mark. Allen pummels Nolan and sends him back to the planet’s surface. Allen tells Oliver that he will see that he is right and Oliver goes with him. Nolan falls back into his house and Debbie attacks him, believing that he’s trying to take over Talescria after watching on the news. A crying Debbie listen to Nolan and says that they have to warn Mark. He passes out and is surrounded by Talescrian Military to be taken into custody.

Retrieved from "https://imagecomics.fandom.com/wiki/Invincible_Vol_1_86?oldid=42461"
Community content is available under CC-BY-SA unless otherwise noted.