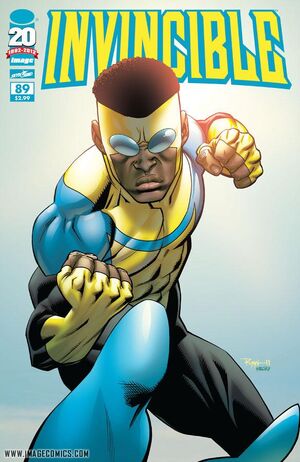 If you've got an extra costume-- I change my hair, don't get too close to the client... yeah... I always did like that costume...

Before going to meet Mark, Thragg, Oliver, and Allen, Bulletproof goes to Art to get a new costume, much to Art’s suprise He introduces himself as Zandale and Art asks if he was sent by Black Samson. Zandale corrects him by stating that he had helped the new Green Ghost in the past. Zandale sees Mark’s costume and attempts to use it. Art tells him that it’s spoken for. Zandale sees another costume with solar disk and decides take it for a spin.

Currently on the dark side of the Moon in the Viltrumite Warship, the Guardians of the Globe, a sad Samantha Eve Wilkins, Oliver, look in sorrow. Thragg talks to Cecil about him being in Viltrumite custody. Thragg asks if Cecil is charge of Earth. Cecil corrects him by saying that he is in charge of its protection. Thragg reveals that they have been on the Moon for months, unbeknownst to Cecil. Thragg tells him that Cecil doesn’t have a choice and that they weren’t able to detect their ship because the technological superiority. He also mentions that if he attacks, he will kill them. Cecil asks Thragg to do everything he can to help.

Meanwhile in Dinosaurus’s base, Allen and Dinosaurus battle, mistaking Allen for an enemy. Dinosaurus comments that he is evenly matched with Allen and Allen corrects by stating that he has been holding back. Dinosaurus apologizes after learning that Mark had sent him. Dinosaurus mentions that he has had no encounters with aliens from other planets and his appearance startled him. Allen compares him to a Ragnar much to his confusion. The duo head to the Viltrumite Warship.

On the ship, a crying and saddened watched a sickly Mark, hoping for him to survive. The Viltrumite doctors tell her to leave as she will get in the way. Zandale see her and goes to comfort her. Rex’s drone looks at a saddened Amanda and he turns away, much to Amanda’s sorrow.

Dinosaurus and Allen arrive and Allen apologizes because he assumed that Dinosaurus could hold his breath in space, much to his confusion. The Guardians ready themselves for battle after seeing Dinosaurus. Dinosaurus argues that their battle would bring down the Warship and that his genius level intellect can help. Thragg tells him that he will not be needed. Dinosaurus argues that him helping will gain favor with Mark. Thragg tells a scientist to clear a lab and tell the rest of them to leave. Allen’s insistence angers Thragg and demands that they live.

Thragg goes to a conquered alien race scientist and asks him if he’s found a cure. The scientists says no, but tells him that his body is fighting off the virus. He also reveals that Mark is a match, much to his surprise. Thragg becomes angry and tells him that he cannot tell anyone. The scientists that he won’t, but Thragg crushes his neck, causing his brain matter to gush around the room. Thragg drops is he and apologizes to leave.

At the Grayson House, Zandale goes to comfort Eve and Eve gets a call from the Invincible Inc. business. Zandale offers to help, but she says that when he tried to help, people refunded since he was Invincible. Zandale comes up with an idea to fix the problem. He unbraids his cornrows and shaves his facial hair to look more like Invincible. He plans to not get close so that no one can tell who he is. Zandale puts on Mark’s costume and begins to flying around the city. Dinosaurus examines some tubes and Thragg looks into the long deceased skull of Lord Argall

Retrieved from "https://imagecomics.fandom.com/wiki/Invincible_Vol_1_89?oldid=51652"
Community content is available under CC-BY-SA unless otherwise noted.