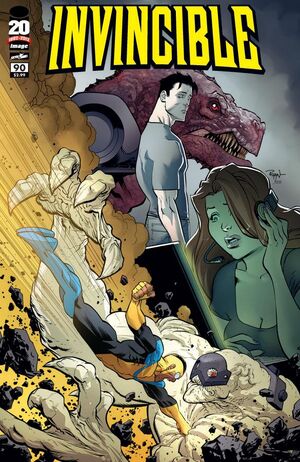 Of course you will survive the virus...to do so would betray the bloodline. For thousands of years I have acted as Grand Regent...charged with the task of locating the lost son of Argall, placing him on the throne of Viltrum...your father...you...no. I will not yield my position to traitors. If I have to forfeit our time here...here on Earth...so be it.

While Eve is talking on the headset, Zandale is rushing to take care of the power station being attacked. Eve comments that Mark is much faster than Zandale and Zandale accidentally drops the phone. He sees that it is the Walking Dread absorbing electric energy. Zandale tackles him, much his surprise.

On the Viltrumite Warship, Dinosaurus asks enters Thragg’s quarters, much to his surprise. He assures Thragg that he doesn’t trust him either. He also reveals that he had hacked the system and found his quarters that way. He asks Thragg for the scientist so he can compare notes with Thragg telling him he’s “unavailable.”.

After leaving the Pentagon, Allen and Oliver discuss where they will go. Oliver suggest Talescria since he has no connection to Earth. Allen worries about Mark being in a Viltrumite Warship. He also reveals that since he failed the mission, he’s in no hurry. Allen worries that the he was ready to kill all Humans until Thragg found them.

Oliver says they could have worked. Oliver’s disattachment from the Human race worries Allen and he explains. Oliver explain that he has recollection of all of his memories and the Thraxans don’t see death as a tragedy. Allen asks if he wants to visit Zack and the duo leave the planet. At the Grayson House, Eve is crying over Mark being away from here.

Zandale sees her and she wipes her tears. Zandale tells her that the Walking Dread absorbed too much energy and burnt itself out, stating that Cecil to imprison him. Zandale goes to comfort her and asks if he can keep her company. Eve mistakes him from attempting to sleep with her. Zandale assures her, but says he won’t unless he wants him to. Eve asks him to leave and he goes.

Thragg finds Mark and tells him that he knows that his body is fighting off The Scourge Virus. He also finds out his body is fighting off the virus because he is of royal bloodline. Thragg finds out that Mark is the grandson of Lord Argall, Emperor of Viltrum, making Nolan his son. Thragg says and acted as Grand Regent for thousands of years, tasked to find Argall’s heir to place him on the throne.

He refuses yield his position to them and will sacrifice his position to keep people from finding about his royal bloodline. He grabs Mark’s throat and readies himself to kill him. He says that maybe Earth will believe that the Coalition of Planets was responsible. Dinosaurus sees him and attacks him.

Thragg’s invulnerable and tough skin causes his claws to break and Thragg to be uninjured, suffering only a tear in his costume. Thragg calls him a fool and Dinosaurus reveals that he know his planet’s history, stating that this warship is the last warship for the Viltrum Empire. This angers Thragg. He reveals that he set the certain parts of the ship were the element altered could explode corresponding to his heart rate.

A part of the ship explodes and Dinosaurus demands to know why he’s trying to kill Mark. Thragg says that he’s asking too many questions. Thragg rushes to DInosaurus and pummels him, causing more explosions on the ship. He tosses him aside to check on the explosion. Dinosaurus bites him, but Thragg’s high degree of invulnerability causes his teeth to shatter. Thragg stretches his mouth and causes two more explosions.

Thragg leaves and says that Dinosaurus will hope that he will be dead when he comes back. Dinosaurus pick up Mark’s body and goes to escape pod, leaving the Viltrumite Warship. Eve visits Cecil and learns that there’s seismic activity by the side of moon where the warship is. Eve tells him to send up there, worried about something that’s going on.

Zandale goes back his apartment, regretting propositioning Eve. Zandale is approached by a woman and likes his costume. She seductively says she will like it better if he took it off, much to his happiness. Dinosaurus lands the escape pod into his secret base and loses consciousness. Mark wakes up and sees him injured, much to Mark’s confusion.

Retrieved from "https://imagecomics.fandom.com/wiki/Invincible_Vol_1_90?oldid=42465"
Community content is available under CC-BY-SA unless otherwise noted.