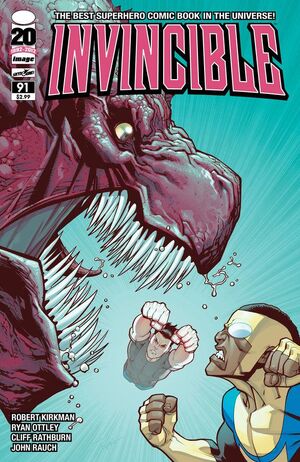 Thragg assesses the damage that his battle with Dinosaurus caused. He sees an upset Eve, but is unable to hear her since she doesn’t have a thought receiver. Thragg takes her into the ship tells her that Mark isn’t there. She transmutates sharp swords from the air, thinking that Thragg removes him. Thragg laughs at her, and tell her to calm herself before she is impaled again. Thragg directs her to Dinosaurus.

Meanwhile in Zandale’s apartment, his last name is revealed to be Randolph. After having sex with his girlfriend, she comments she preferred his cornrows, calling it more distinct. Zandale tells her that it’s the idea and tells her that Mark’s girlfriend is trying to keep her business. The girl, who’s name is Carla, asks who Eve is. She begins to cry, asking if Zandale has cheated on her again. Zandale assures her and says that it was a mistake. He apologizes and promises to make it up with her. She wipes away her tears and he takes her out to eat.

Mark talks to David Anders about what has happened. David asks Mark if he’s doing anything evil. Mark argues that Dinosaurus isn’t evil and compares him to brother. He states that he means to do good things, but lacks the “human element”, calling him “pure intelligence.” Mark attempts to bore David so that he transforms into Dinosaurus. However, it isn’t working. Oliver and Allen go to help Zack who is fighting a symbiote organism. Allen punches the organism and Eve uses a transmutation shield to contain him. Zack thanks Eve and Eve asks for Oliver and Allen’s help in finding Mark. Allen directs her and Oliver towards the location while taking the alien to Stronghold Penitentiary

Meanwhile at Crockett’s Grill and Fine Eatery, Zandale is eating with Carla. Zandale says that he won’t forget what’s he done to her and says he’ll never forget what happened. Carla and Zandale head out, but are interrupted by Eve. Eve asks Zandale for his help with Carla demanding to know who she is. David is relieved that Dinosaurus isn’t coming out. Mark is frustrated, stating that the enemy could attack at any time.

Dinosaurus finally transforms, revealing that his Dinosaur form was healing up. Dinosaurus reveals to Mark that Thragg had attempted to kill him, much to Mark’s confusion and dismay. Zandale rushes in at Dinosaurus and tells him to run away. Mark is confused, not knowing who Zandale is. Dinosaurus grabs Zandale and smashes him into part of the lab. Eve rushes to see Mark and the duo embrace. Mark flies to Dinosaurus and Zandale, but Oliver grabs him. Allen goes toward him and Dinosaurus mistakes them for Viltrumite agents. Mark attempts to explain that he’s on his side, but the four of them keep fighting. Mark punches Allen and screams in pain. The four of them look in shock as Mark’s arm is broken from the attack.

Retrieved from "https://imagecomics.fandom.com/wiki/Invincible_Vol_1_91?oldid=42466"
Community content is available under CC-BY-SA unless otherwise noted.